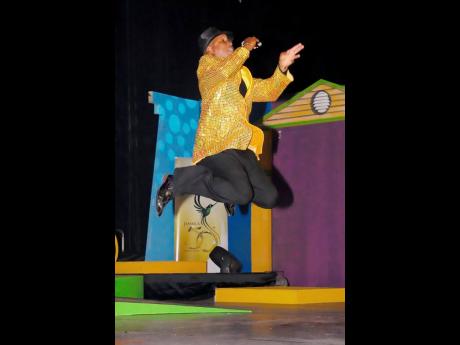 The month of June has always been very special for entertainer Roy Rayon. It’s his birth month, and this year, in particular, as he celebrates a special anniversary, his loved ones will be pulling out all the stops to ensure that Mr Festival has a celebration like no other.

“It will be my grand 60/40,” he said cryptically. “Ten years ago, it was my 50/30,” he added. What this all means is that this year, Rayon will be celebrating 60th birthday and 40 years as a professional in the entertainment business. “My birthday is on June 20, but the party will be on June 22. My daughter has all kinds of exciting plans,” he told The Gleaner gleefully.

Five minutes into the interview, the four-time Festival Song winner went off topic to inform us that he was frying and steaming fish, and also to boast about his skills in the kitchen, all thanks to his mother. “Let’s just say that me can help myself, and nobody ever complained,” he said. “When I was 10, my mother said to me, ‘Come inna the kitchen and learn fi cook, and go wash you drawers ’cause mi nuh want no woman tek mi bwoy pickney fi eediat’.”

And Rayon said he has heeded his mother’s advice. In-between giving mouth-watering updates on the special seasoning he was using on his fish, such as “tambric” (turmeric), as it is known in his neck of the woods, Rayon managed to talk about his plans for this weekend. He will be exercising his philanthropy when he makes his debut at the Powerful Women and Men Perform for Charity concert, scheduled for this Sunday, June 9, at the National Indoor Sports Centre in Kingston.

According to the Give Thanks and Praises singer, “When the organisers called me, I had to say yes. I am a pushover when it comes to charity, and it wasn’t a difficult call at all.”

Regarding his upcoming weekend performance with another Festival Song winner, Eric Donaldson, he stated, “It’s a ­situation where Eric and I will be having some fun doing a song-for-song set, about four songs, and hopefully, the audience will enjoy it.”

However, the powerful concert is one of three engagements that Rayon has lined up for Sunday, all though his own fault. A member of the Jamaica Cultural Development Commission’s Cultural Affairs ­Committee, Rayon also assists with the training of the Festival Queens, and it just happens that the grand coronation for Miss Kingston and St Andrew Festival Queen 2019 also takes place on Sunday. Add to that a performance at Hope Gardens for the closing of the jazz festival being staged by Myrna Hague, and it seems that Rayon is in quite a pickle. “I have a very hectic weekend,” he confessed. “But the problem is that I thought that one of the events was on the 16th, only to find out that it is on the 9th. Anyway, I have it all sorted out,” he assured,

“The great thing is that Myrna’s show at Hope Gardens starts in the day, so I will be able to do a full performance there without any rush and then head over to the Little Theatre for a short while. I am not down to perform there, so I will be able to show up and then leave for the National Indoor Sports Centre for Powerful Women and Men,” he outlined.

He said that this triple booking would have been quite normal for him back in his heyday. “I would do Denbigh in the day then turn up at the National Stadium for Grand Gala and then leave there and do two or three other shows for the night,” he said.

Asked about touring life now, Rayon admitted that it is not as exciting as he would like but pointed out that he has an upcoming show in New York in September and is on the verge of signing on for a few shows that could possibly see him out of the island for the Independence season.

Rayon, who is still recording, won the Festival Song competition with Love Fever, Give Thanks and Praise, Come Rock and Rise and Shine.