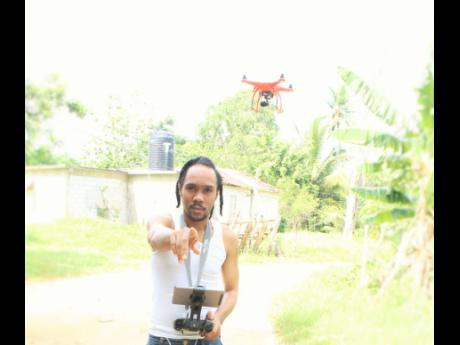 St Catherine born film-maker  Kevin Lennon is using real-life events to bring awareness to serious issues plaguing the country under his K-Base Skyview Visuals production company. His latest movie, Death Do Us Part, tells the story of a husband whose substance abuse, jealousy and domineering nature drive him into a murderous rage.

Lennon said that the film, released on subscription-based service Patreon in April, was influenced by the increased number of murders stemming from domestic abuse, which has wrecked the country in recent months. “You watch the news and hear about men killing their wives and children, so I decided to do a film on it but have a different ending where the man doesn’t get to murder the wife and is held accountable for his actions,” Lennon told The Gleaner.

This ‘positive’ outcome is sadly not the reality for many women and children. Earlier this year, Acting Assistant Commissioner of Police Steve McGregor revealed that domestic disputes accounted for, the bulk of the 1,287 murders recorded in 2018. These disputes have spilled into 2019, and in one case with 28-year-old Leon Whyte chopping his mother, Jennifer Gordon, 56, and his five-year-old brother to death in Martha Brae, Trelawny, last month. Weeks prior, correctional officer Patrick Gowans murdered his estranged wife, Rouleene, before committing suicide.

Lennon hopes the movie will reach a wide audience and said he is already receiving good reviews. “The feedback has been really good, and a lot of people have been giving me positive feedback for highlighting the issue and giving it a different spin,” the 35-year-old said. “I would love to pitch it to local networks; that would be good and give me more support with getting my films out there.”

A graduate of Charlemont High School, Lennon is from Treadways district in Linstead and said he has no formal training in creating films. Leaving high school when he was 18 years old, he taught himself how to edit, direct, produce, write and manoeuvre production equipments.

He created a recording studio in 2002 and also became involved in music video production. He later established his film production house and released his first production, Jealous Ova (also inspired by domestic disputes), in 2014. Teaming up with his contemporary, Horrain Wilson, he released the sequel in 2016, and the two also worked together for the January 2019 movie Clovis 2. Wilson also has a writing credit for Death Do Us Part.

Lennon said this is his full-time job but noted that he faces considerable financial challenges as a young film-maker without sponsorship.

“I use local talent for my cast, and I can only pay them a little something as everything comes out of my pocket – from buying the equipment to paying the cast – and it is rough,” he lamented. “The actors we use for our productions are friends, so they see it as a good avenue to expose their talent, but we really can’t get to pay them what we would like to.”

As a result, Lennon is putting in the work to be recognised commercially and has plans to make it big like American film-maker Steven Spielberg.

“My long-term goals are to do all I can to get the movies out there on a larger scale, bring it to overseas audiences, and to make unique movies that go beyond the regular themes we see in the local movie industry,” he said. “I want to be able to hire more talent so they can get exposure, even hire people from my community, too. On the music side, I’m currently working on an album with Eric Donaldson, so the work never stops.”