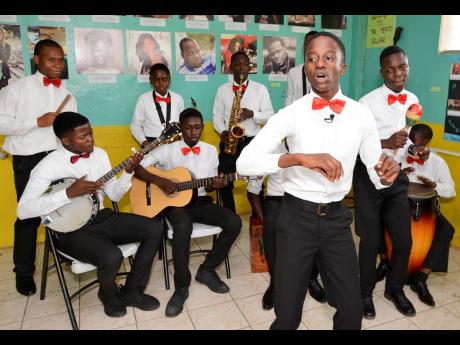 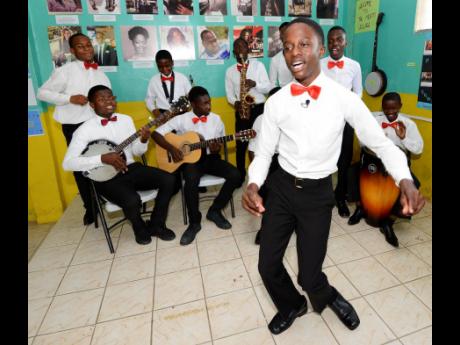 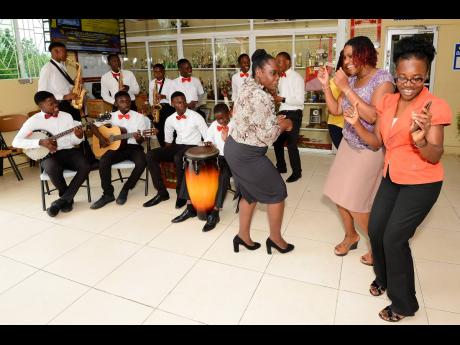 Ian Allen
Teachers at Charlemont High school dance to the Mento Beat played by the school's band at the school on Thursday, June 6, 2019. 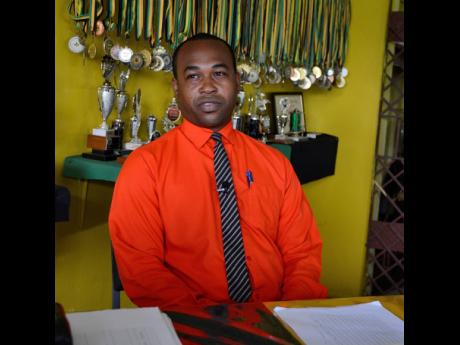 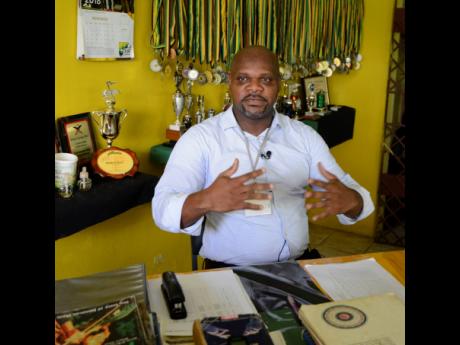 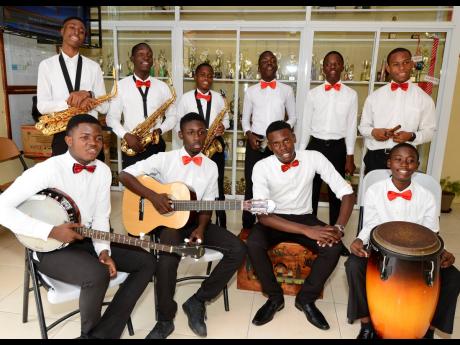 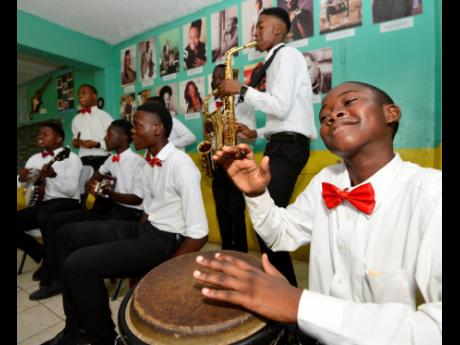 Ian Allen
The band members have all credited the band for developing their confidence and love for music.
1
2
3
4
5
6
7

In grade seven, Jade Brooks decided to join his high school band playing the drums. “But I heard somebody else and took a U-turn then started playing the recorder. But a suggestion by his music teacher Dacham Morris, led him to the bass. Brooks told The Sunday Gleaner, “he said, ‘you know you should play the saxophone’. I said ‘sir what is that?”. Today 16 year old Brooks is a very talented saxophonist in the Charlemont High School Rhumbakah Mento Band.

His story is similar to that of his other approximately 20 band mates. Today, they praise a programme that has not only won them numerous prices and act as an income earner, but have also helped in their personal development.

Sturdily upholding the mento musical tradition - the school heeded the call from the Jamaica Cultural Development Commission (JCDC) and UNESCO - to push energy and resources towards revitalizing the quieting melodies of mento.

Mento was introduced as part of Charlemont’s band programme in 2017, through an initiative of the JCDC and UNESCO. “They wanted to revitalise mento, so they picked five schools in Jamaica that have been doing well in music. They gave us a few guitars, banjos, a rhumba box, saxophones, rhythm sticks –everything to start the programme. I’d never guessed it would be this successful,” music teacher and band coordinator Nigel Powell told The Sunday Gleaner.

The programme, led by Powell and supported by fellow music teacher Morris, is so high functioning that after graduating, the students are already award-winning – and able to perform at an international level.

“This year, they defended their Stage Band title at the JCDC National Music finals. This is their fourth consecutive year winning this title. They beat not only school bands but adult bands – because they are not just mento musicians, they are pop musicians,” Powell shared.

Some current members of the Rhumbakah Mento Band have plans to attend Edna Manley College of the Visual and Performing Arts. While participating in the band lays the foundation for such aspirations, the boys shared that Rhumbakah has already seen financial returns.

“I joined the mento band because it helps me financially and it builds my character,” Brooks told The Sunday Gleaner.

Brooks is a shining example of the benefits of recognising and nurturing talent. Now, if you catch Brooks with the saxophone away from his jowls, the youngster’s voice is part of the group’s well-balanced, pleasing harmonies. “I couldn’t sing, so this was a tool for me – as like, I’m singing.”

Banjo player Micheal Messado (age 15) gave a similar story – heeding his teachers’ suggestion to pick up the dated instrument. “I thought of mento music as ‘olden days’, that it was boring – because you would normally see older men playing these types of instruments. So as any young child, I felt a little bit old,” Messado said. But after finding his first ‘C’ chord, the rest is history.

“I took the initiative. I went on Chrome and download an app with a number of banjo chords. From there, I progressed myself. In my music library, there were a lot of gospel and pop songs, but now there is actually more mento music than all those type of music.”

Vice-principal of student affairs, Maurice Sullivan, says that the school’s administration is very supportive of the music programme, as coordinated and managed by Powell and Morris.

“The students involved have really put Charlemont on the map – whether present or ones that have passed. We have past students who are performing all over the world, and they’re earning big bucks.” Some past students of Charlemont High School include Lenya Wilks, Verlando Small, Leon ‘Fish’ Campbell and Andres Lopez.

“We’ve produced students who are producing for people like Vybz Kartel and Alkaline. We have musicians who have won Rising Stars, who play for people like Buju Banton. It’s a very big programme. We have students in the hotel industry, in the classroom, the police force, the army,” Powell added.

Sullivan advocates for the treatment of music as a worthy, lucrative pursuit.

“Once the child really shows that affinity, they should be encouraged. I don’t think now is the time to look at music in a negative light. Parents really need to allow them to develop the skills. Mr Powell has a way of identifying them early.

There’s one boy right now, he was so shy in grade seven. But when I see this boy now, when he get out there to perform – his movements, his singing. I can’t believe that is the same boy who could hardly open his mouth,” she said.

“I’ve seen changes in quite a few of our band members. For example, the saxophonist, Jade. I remember when he came here – and I could use other examples but, in particular Jade – he did not know things on the saxophone, and in a few weeks we had him playing a whole song. He’s just one of the faster learners,” Morris shared.

Ultimately, Powell, Morris and Sullivan all hope that the continued success of Charlemont High School’s music programme will help shift the perception of music – putting it to the fore as a viable option for a fulfilling career.

“There is a stigma that is attached (sometimes) to becoming a musician. They think it’s not marketable, there’s not much money in it, it’s not lucrative.

But there are so many areas, you can make a prodigious amount of money.

You have the hotel industry, cruise ships you can go on, you can teach it, produce it – so many aspects of music where you can make so much money,” Morris said.

The boys also recognise their potential - with many reporting that they aspire to become well-rounded and marketable musicians.

“I want to play all the instruments, so I can be marketable. Not only the saxophone, but keyboard and drums,” Jade said. After high school, he also wants to go to Edna Manley to study music. “And after that, I’ll get my doctorate in physics.”

Micheal shared similar sentiments. “I want to be a marketable musician, in that if I get a call to say ‘come to this event’ – if that event requires me to play keyboard, then I’m marketable enough that I’ve learned the basic skills to do that work,” he said.