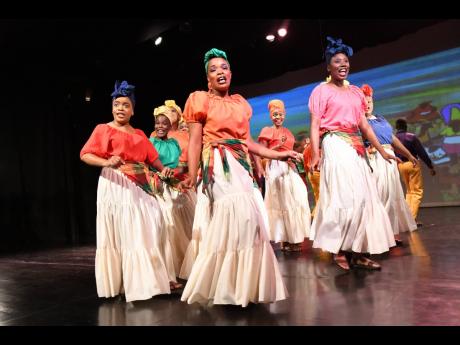 Rudolph Brown
A lively opening to the University Singers 2019 season at the Philip Sherlock Centre for the Creative Arts.

The University Singers, or better yet, the ‘Universatile Singers,’ are wearing this new stylistic description with poise, flair, and attitude at the opening of this year’s concert season at the Philip Sherlock Centre at The University of the West Indies, Mona campus.

With a programme that glides through delicately harmonised hymns into uplifting popular classics, before a dip into clever modern folk arrangements and a ‘flairy’ ode to contemporary reggae, the season set, which continues until June 30, is sure to scintillate, leaving audiences tickled and refreshed.

Opening with Psalm 24, Franklin E. Halliburton conducted the choir as gracefully as they sang. The choir was decorated by curtains with pepper lights and moving images on a back screen – a thoughtful production decision to stir the senses. So while the ears were engaged, the eyes were also part of the equation.

In the pop-classic segment, soprano Ranice Barrett delivered a technically sound and impressive rendition of Somewhere Over The Rainbow, though she perhaps seemed too happy for a song meant to translate longing.

Lifting the energy further came a wakening arrangement of Wayne Marshall’s hit single, Glory to God. The numerous voices of the choir added more volume to an already powerful song. Intermission was followed with the lively folk segment – that inspired peals of giggles and laughter with Everytime A Pass, You Tell A Lie, and the hilarious lament to Liza by tenor Shaquore Nicely, arranged by Halliburton.

Allowing the band to show off their skills, the choir exited to prepare for the finale – the Chronixx medley, featuring hits like I Can, Skankin’ Sweet and Here Comes Trouble. Showing off how truly versatile they have become, the singers added the Flairy dance move to their already captivating choreography.