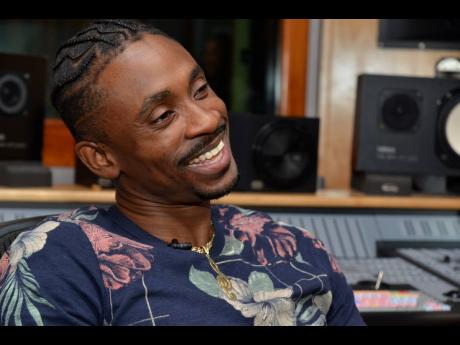 Reggae singer Christopher Martin didn’t always want to become an entertainer. It was his dream to become a chemical engineer, and he studied hard and did all the requisite subjects that would have prepared him for this job. Advanced math, pure math, and physics became par for the course, and having passed them all, he found himself against a wall.

“The money wasn’t there to fund university,” he told The Gleaner. “And for me, personally, a student’s loan was not the way forward.”

It was then that his friends suggested that he enter ‘Digicel Rising Stars’ and win, using the money to pay for higher education. “‘Rising Stars’ was then about to enter its second season, and I knew that Cavan had won, but I didn’t know much else about it. And please note that my friends said to me, ‘Enter and win’,” the Big Deal singer pointed out.

Well, he did just that. However, having won, Martin had a slight change of plans. “Instead of doing chemical engineering, I chose a course that was less demanding because the music had become such an integral part of me that I knew I had to continue on that path,” he explained.

However, going to university was still extremely significant. “I became the first person in my family to get a university degree and set the trend. So now, my younger brother also graduated from UTech (the University of Technology, Jamaica),” he said with pride. “And my children will have to go to university,” he added.

Martin has achieved a lot in the 14 years since winning ‘Digicel Rising Stars’, travelling the globe and becoming a household name. Signed to VP Records, he recently released his sophomore album, And Then, a product which falls neatly into Martin’s ‘sugar reggae’ description. In May, And Then made its Billboard Reggae Chart début at number one. Among the producers on the album are Robert Livingston, Llamar ‘Riff Raff’ Brown, Kingyard Productions, Fabrice ‘Frenchie’ Allegre of Maximum Sound, White Gad Productions, and Chimney Records. We recently caught up with the singer, and today he takes centre stage in this week’s 5 Questions with...

What is your favourite song on the album?

All 15 are my favourites. Each song is special to me. I can remember everything about each one. Where I was when I was writing the song, when I was recording.

Why ‘And Then’ as the title?

Well, after the album was completed, the next task was to come up with a name. It was about the time when I was about to welcome my son into the world, and my manager and A&R (artist and repertoire) thought that my son’s name would have been Anden. However, my son’s name is actually Aiden. But I liked the name. And Then suggests continuity.

Are there any genres, besides reggae and dancehall, that you are thinking of adding to your repertoire?

I am seriously thinking of adding gospel. I want to do a gospel album and dedicate it to my mother. My parents, especially my mom, have been so supportive. They both sing very well, and I would have to do a song with them on it.

What’s the greatest lesson you have learnt so far in the music industry?

Patience. When you don’t run down something, it runs you down. I know that for a fact.

How did you and Usain Bolt link up?

Jermaine Gonzales and I attended the same all-age school, and after that, our paths separated, but we were still friends. When I came to Kingston in 2005 to do ‘Rising Stars’, we linked up again. And he’s an athlete, so he knew Bolt like that. I went to check him one day, and Usain was there and talking, and talking, we realised that we had similar interests, and so our friendship grew. He’s a wonderful individual. A really great guy.