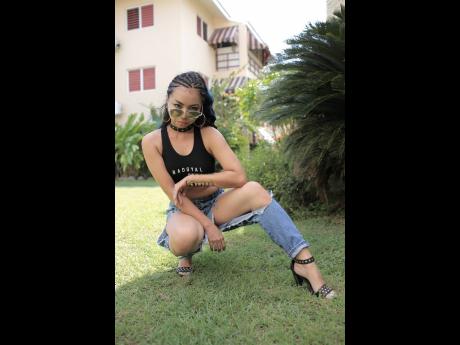 Marie Sano is known on the dancehall circuit as selector Bad Gyal Marie. The selector told The Gleaner that ever since her first trip to Jamaica when she was 19 years old, she knew she wanted to immerse herself in Kingston’s nightlife, and the dancehall culture spoke to her from sky-high speaker boxes. Since then, she has been blazing a trail in the sound system space. Her work on the local circuit for the past 10 years, paid off recently when the sound system she started in 2009 won their first sound clash title. Notorious International are the 2019 champions of the Boom Sound Clash.

“First time I came to Jamaica and I saw the sound system in the streets, I was about 19, and the culture really shock me. Is good people inna di night a enjoy it together. It wasn’t rough like yuh hear when people talk about dancehall. In the streets, people just a enjoy themselves. I loved that, and I knew then I needed to be a part of it,” she said. “I start my career in Japan as a deejay, but when I came to Jamaica, I was just surprised. The reaction from Jamaican people is totally different than in Japan. It’s more energy, more vibes. More while, dem a beat zinc fence in the streets and I feel alive. I feel like I had to do this. I want that reaction when I play. I wanted to be a real selector, where I play four or five hours at a event. In my young days, I play in some hot dance like Weddy Weddy and Passa Passa, so I get the experience. But I wanted more. I know I could handle more, so I just started my own sound system.”

Bad Gyal Marie expressed that as a stranger in a foreign country, she was never made to feel like an outsider. She said the Jamaican ­people embraced her and revelled in the idea of a Japanese woman playing on sound systems. “As a Japanese woman, me alone a come to Jamaica, no family, it was kinda rough at first. It was very hard, me alone come to a foreign country. First thing, moneywise it was hard. But the people show me nuff love. When I go to dance and play and people excited, that stress gone immediately. That make me happy. It always surprise me when people react to my play. A Japanese woman a play fi dem music? I try to always play different from other selectors, so dem just love me, and I always get a big big ‘forward’. Dem never fight against me, dem always cheer me.” She says even her stage name was inspired by the reaction of the Jamaican people. “A street people give me dat name, innu. I start my career as deejay Marie, but in the streets you affi be hardcore. People start say, dat Japanese gyal, she bad, she a bad selector, so I just say Bad Gyal Marie. I like the name.”

Now that she has made a name for herself on the local circuit, the selector says she tries to take the Jamaican culture back home on her annual trips. She says dancehall is a big deal in Japan, and she prides herself on bringing the authentic experience to them. “I’m living here now ’bout 10 years, but I go back to Japan every year and do tour there. People excited for me there in Japan, and I always bring some Jamaicans with me, and they love to see them. Last year, I bring Chromatic, and this year I will bring Rory Stone Love in September. Japan people love dancehall and I want to bring real culture and real vibes to Japan. Dem love it. Some Japanese selectors have sound system in Japan. Dem just respect and love the culture.”