Missy Elliott in tears getting inducted into Songwriters Hall 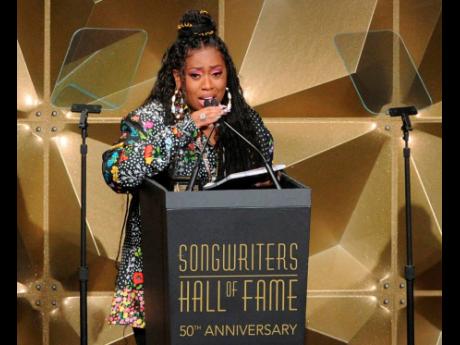 Missy Elliott, the creative mastermind who has written hit songs for a number of female acts and created camaraderie among women in the music industry for more than two decades, felt the love back from her musical sisters as she became the first female rapper inducted into the Songwriters Hall of Fame.

During a performance, breakthrough singer-rapper Lizzo brought Elliott’s colourful and eccentric music videos to life in an ensemble similar to what Elliott sported in the late ‘90s – the finger wave hairdo included. Da Brat, fiery as ever, joined Lizzo onstage for Sock It 2 Me in New York on Thursday.

Queen Latifah, a Grammy, Emmy and Golden Globe winner, inducted Elliott with kind words as she paid homage to their long-lasting friendship. And even former First Lady Michelle Obama took her turn to say how much of a Missy Elliott fan she is.

“Missy, I want to thank you for all of your trailblazing ways,” Obama said in a taped video that aired during the event. “Thank you not for just sharing your gift with the world but for being an advocate for so many people out there, especially young girls who are still figuring out how to make their voices heard.”

It all brought Elliott to tears: Near the end of her 10-minute speech, the Grammy winner broke down after telling funny and deep stories about how her creative mind worked as a child.

“I am thankful,” she said, pausing for a few seconds.

“Every time I come up to a podium ... even with all the work that I’ve done, I don’t know, and I’m assuming it’s just God, I don’t know why I am here,” she said with tears in her eyes as the audience erupted with cheers and applause. “I want to say one thing to the writers, to the upcoming writers: Do not give up. We all go through writer’s block. Sometimes you just have to walk away from a record and come back to it. But don’t give up because I’m standing here. And this is big for hip hop, too.”

Elliott is just the third rapper to enter into the Songwriters Hall, following Jay-Z and Jermaine Dupri’s inductions in 2017 and 2018, respectively. While she’s written her own hit songs – from Get Ur Freak On to Work It to Lose Control – Elliott has also lent her writing skills to others – specifically girl groups and pop and R&B soloists, including the late icon Aaliyah, Beyoncé, Whitney Houston, Monica, Mariah Carey, Janet Jackson, Mary J. Blige, Ariana Grande, Destiny’s Child, Fantasia, Jazmine Sullivan, SWV, Total, 702, Mya, Tweet and others.

Songwriters are eligible for induction after writing hit songs for at least 20 years.