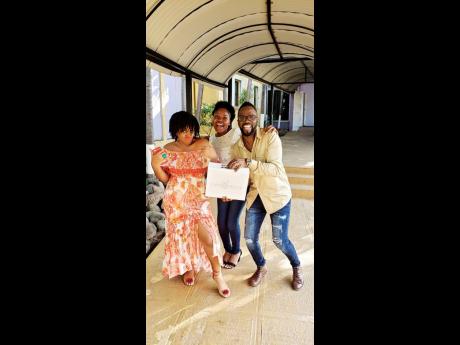 The comedic duo of Owen ‘Blakka’ Ellis and Ian ‘Ity’ Ellis found out there were brothers when they were adults. Blakka, 59, grew up on First Street in Arnett Gardens while ‘Ity’ was raised across the road in the neighbouring community of Rema.

“I never knew my father, Leslie, until I was a big man. I’m glad I didn’t grow up with him because he’s a ‘stamma’ man, so I never get the stamma beating,” Ity joked.

“I discovered Ity was my brother when I was in my 20s. He had just passed him Common Entrance Exam to go to St George’s College. After that, we were inseparable,” Blakka told The Sunday Gleaner.

Perhaps it was nature as Blakka and Ity’s father was a performer himself - singing backing vocals for his brother, Alton Ellis.

“I suppose performance is in our genes,” Blakka reasoned. But the question of nurture is clearly nullified by the fact that their father was absent.

“My father never attended a PTA meeting, a ceremony – he was never there,” Blakka added.

As a result, Blakka was the polar opposite when raising his own children.

“He was never there, so when it was my turn, I overdid it. I was at every PTA meeting. I was PTA president! I never missed a recital or game. I was trying to overcompensate.”

He continued, “They say I shouldn’t be there so often, that I don’t really give them a chance to discover things on their own, but they know they can call me for anything.”

Though Blakka’s parenting was informed by his father’s absence, Ity takes his cues from his stepfather. The general attitude towards stepfathers and mothers, perhaps sustained from Cinderella’s classically tragic upbringing, has always been negative. But as a comedian, Ity has extracted the most noteworthy, palatable ­memory of his own.

“My stepfather was always inebriated, but he also always said I was a genius just because I could read the newspaper. That encouraged and inspired me to feel good about education,” Ity said.

Now, he carries on that lesson – the importance of a solid education – with his own children.

The Ellis brothers take to the stage today in a bid to entertain fans with their comedic offerings at a show to be held at the Courtleigh Auditorium in Kingston. They hope to use this stand-up special as a springboard for Ellis International’s Ghetto Misfits Foundation.

“We want to introduce programmes for other misfits who can go and embrace ambitious projects and ideas that can make their lives productive,” Ity said.

“We want the Ghetto Misfits Foundation to do things like activate the Trench Town Reading Centre so we can watch them learn and grow,” he added.