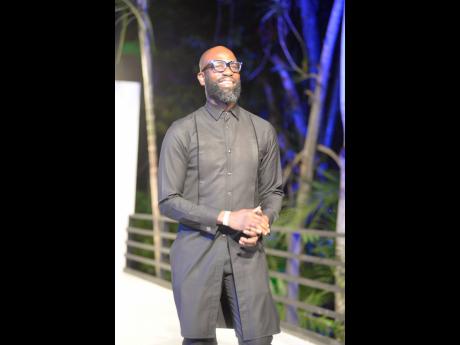 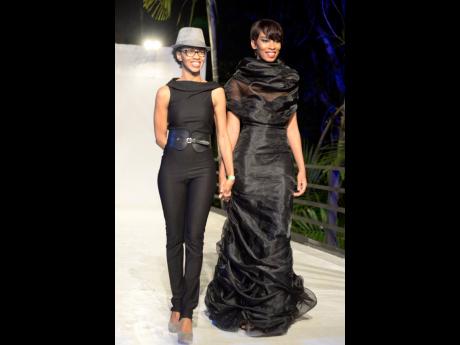 Lionel Rookwood
Designer Arlene Martin, founder of Drenna Luna, makes a quick appearance on the runway with her finale piece. 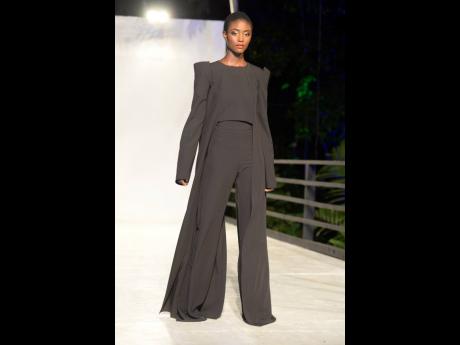 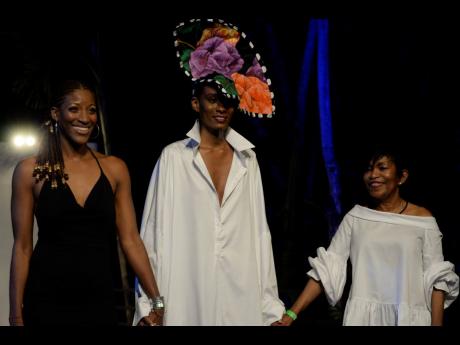 June is the month when Pulse presents its Caribbean Fashionweek (CFW) for local and international fashion houses to showcase their latest collections in fashion capital Kingston. When one thinks of the runway, the vision is most often of models strutting their stuff in front of the world’s press and fashionistas in a way that makes each piece of couture appear more extraordinary than the next in the few seconds provided in the spotlight.

However, pleasing a crowd full of critics at a fashion show like CFW is no easy feat, and the production team and the couturiers have to think outside the box in order to capture the imagination of guests. Here comes the advent of rhythm on the runway, combining tight catwalk choreography and exaggerated movements into a fusion of high-octane music. Music in production is very significant to the designers’ collections because it helps to build the atmosphere and the narrative of the designs, says co-managing director of Pulse Investments Limited, Romae Gordon.

Gordon told The Gleaner, “It (music) pulls everything together, and so when you hear that rhythm, if the designer wants a sombre mood, then the music selected is as such. A lot of research goes into preparing the music for the collection for it to have that resonant message.”

Claudia Pegus, known for avant-garde, high-fashion garments, kick-started the CFW presentations, which explored the theme ‘Collections from Africa and the Caribbean’ inside the tropical forest setting of Villa Ronai, with a unique resort collection called ‘Welcome’. It was accessorised with hats by her yoga teacher-turned-designer, Kassandra Pemberton, modelled to a compilation of groovy soul and funk music. Mutamba followed with a flavour of Afrobeat music; the sounds of Nigerian artiste Skiibii’s Sensima playing low in the background added a little more authenticity to the relaxed mood of the breathable fabrics yet projected the vibrancy of the Afrocentric pieces.

Heather Jones and her carnival-inspired collection shepherded the second set of designers with uptempo sounds of her island home Trinidad, which included Nailah Blackman’s 2018 Sokah single. Another familiar face to the CFW runway, Arlene Martin, creator of Drenna Luna, presented her all-black capsule collection in celebration of her tenth year in the fashion industry. The collection, a range of evocative and sophisticated well-tailored dresses, was modelled to a mix of reggae music. “In recent years, I have only been using Jamaican music to present my collections as a purpose to encourage persons to buy and support Jamaican. It has become significant in sending that message,” the designer explained.

Of course, the lyrics of Chronixx’s Black is Beautiful, “Black eye, black hair, black skin, black queen stands so majestic … ” really struck a tone with the pieces and evoked a feeling of reflection for Martin, whose first-ever collection in 2009 was all black.

One of the VIP guests of the night, model and beauty queen Yendi Phillipps, paid keen attention to the music. “With Heather Jones using soca and Jamaica’s Drenna Luna using local music, it was a great touch, and the transition through the music was a good blend of what is happening globally, locally and throughout the Caribbean region.”

For many guests, the premier Caribbean fashion show was amped up by a million degrees when ‘Mai Atafo’, of the first designer representing from Africa, Ohimai Atafo, stepped into the spotlight. The designer’s carefully and strategically stitched modern menswear and womenswear literally had the guests on the edges of their seats. And contrary to certain expectations that the Nigerian bespoke tailor would use a mix of traditional African music, he ‘dropped it like it’s hot’ with an intriguing fusion of rhythms of Snoop Dogg’s Drop It Like It’s Hot, French Montana’s Unforgettable, Rihanna’s Wild Thoughts, 50 Cent’s Candy Shop for the menswear and the head-turner Only Time by Enya, which complemented the ethereal liveliness of the tulle gowns that closed the runway for night one.

Speaking to The Gleaner after the show, Atafo said: “The compilation of music was done by me, and I basically chose those songs because they spoke to the collection. From the upbeat rhythms of rap and hip hop to the calmer symphonic track for the dresses, it just worked with the collection. I could have easily used Nigerian songs, but it is also hard for us to get the instrumentals for those music produced, and the lyrics would have distracted the audience.”