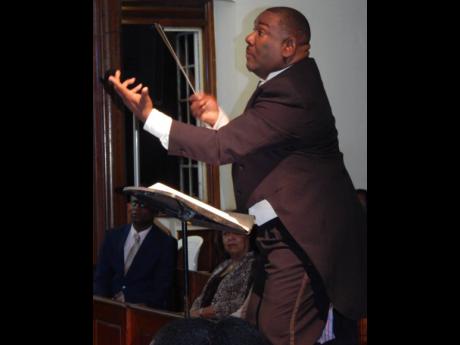 As musical director for both the Philharmonic Orchestra of Jamaica and the University Singers, Franklin Halliburton has an intimate working knowledge of the theatre spaces available in the island. And he is also acutely aware of their inadequacies. Among the Little Theatre, the Ward Theatre, the University Chapel, and the Philip Sherlock Centre for the Creative Arts, there are none that can adequately support world-class international acts, or even comfortably host local classical companies.

“There is no proper space,” he lamented to The Gleaner. “We talk about it, and the talk is always big. But nobody seeks to put their money where their mouth is. We have to be doing gymnastics in order to provide music of a standard quality,” said Halliburton.

Last month, the Philharmonic Orchestra hosted its Spring Concert Season at the University Chapel. “We wanted to present a piano work, so we had to wheel up the grand piano from its position at the back of the church hall and wheel it back down. The space was outfitted for worship. It wasn’t designed to have a concert,” the conductor continued. But even with the spaces we do have designed for acoustics, their orchestra pits and the customary sloping audience rows come up short.

Referring to the much-visited debate, Halliburton highlighted the Ward’s descent into disrepair. “The restoration of the Ward Theatre is topical as it is controversial. It is, acoustically, the best space in Jamaica – and it has fallen into disrepair. It’s unusable.” If it were to be restored to its former glory, the musical director’s concern would move to the space’s capacity – approximately 800 patrons.

He said, “I endorse the restoration of the Ward Theatre. However, it should not be the central focus. I get the impression that’s what our people are trying to do. But we should build something that can accommodate a good-sized crowd. With groups like the Royal Philharmonic Orchestra or the Youth Orchestra of the Americas, for them, we want to fill the house with 2,500. Now, there’s no way we can do that.” To attract such numbers, venues like the National Indoor Sports Centre are suggested. But it’s designed for sports.

“We try to put up a stage and do all sorts of things to outfit the space to accommodate the numbers. People have to come in to amplify the sound. It’s poor, for a creative space like Jamaica. The arts have played second fiddle to everything, yet it is the arts – our music – for which we are most known.”

Halliburton hopes that in his generation, there will emerge a space in Jamaica that supports the performing arts as strongly as spaces in other nations. He recalled studying in London, where he witnessed the arts used as a means to hustle the sensibilities of its citizens. “Walking through Hyde Park on a regular day, you would hear the strings of an orchestra under the baton of the world’s leading conductors – just putting on a concert in the park for no reason. You just have music in the park, and people come and listen.

“Can you imagine a scene such as that at Emancipation Park? How that could soften the sensibilities of our citizens? It is important. Our children would thank us for it,” Halliburton said.