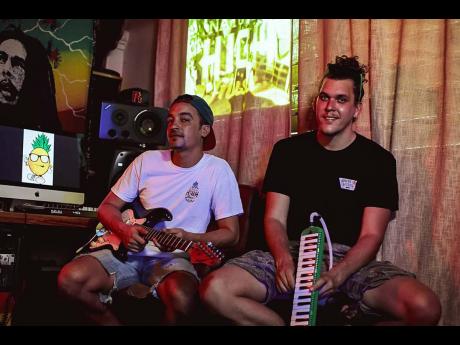 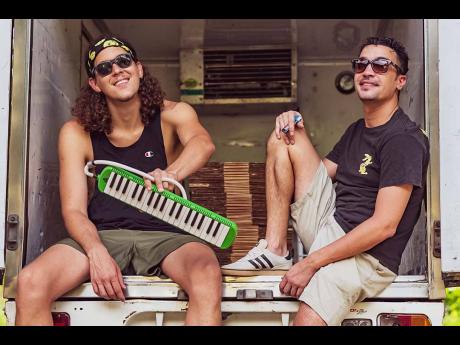 Contributed
The duo alreay have under their belt hits with Wayne Marshall, Kabaka Pyramid and Chronixx.
1
2

Natural High Music are hitmakers, who have been tolling tirelessly out of their Half-Way Tree based studio for over six years, and are seeing the fruits of their labour.

Last Friday (June14), they released their second album, Urban Roots II, from the California-based label Delicous Vinyl Island. “We’re really proud of that one. We’ve been doing it in-between works with a lot of different artistes,” Davis said. For this project they have recruited the skills of vocalists like Capleton, Jesse Royal, Wayne Marshall, Tessanne Chin, Kezamdi, Royal Blu, Makonnen, Indie Allen, and the late, great Crown Prince of Reggae Dennis Brown.

To understand the vibe of the project, just check the title. “The flavour is in the name,” Armond told The Gleaner. He continued, “Urban Roots itself describes the sound that Natural High Music is working with, it describes the whole concept of the album – urban being sounds of the streets because the studio is here – right in the middle of Half-Way Tree.”

“We get a lot of influence just going around the town working with young and older artistes. The roots part comes from our meditation. Just being natural, positive yutes,” he said. Urban Roots was released in 2015, a similar vibe to the follow-up. “It’s our second full-length album. It’s like a mix of hip hop, dub, reggae, a little bit of old-school dancehall flavour,” Davis explained.

Steadily toiling throughout the years has undoubtedly fattened Natural High’s contact list. “The Dennis Brown sample was pretty interesting. That came about when we met up with Clive Hunt – who’s like a veteran producer in the reggae industry,” Davis shared. They met Hunt at Jimmy Cliff’s studio, while he was working on a Dennis Brown remix album for VP records. “Hunt had these unreleased Dennis Brown songs – one of them was Run Run Run – and he kind of put it in our hands to give it a shot and see if it made the album. So we built a whole new riddim around it, and got Jesse Royal involved.”

However, when they got back to Hunt, submissions for the remix album were closed. “So we kept it for our album, which kind of worked out for the best.”

Reap What You Sow

Last year, Natural High Music gave the first taste of Urban Roots II, with the single Reap What You Sow, featuring Royal Blu. The song was released as the first single for the producing duo’s sophomore album, which yielded significant airplay in Hawaii, Europe, and the United States West Coast.

They are currently stockpiling productions for some independent releases later this year. “I don’t think we have a big masterplan. From when we were young, we always wanted to do music, and to be doing it on this level, to have songs out there like Glory To God, that the whole country is rocking to – that is the success. We just love making music. If we could always just be doing that ... . That’s the goal,” Davis said.

Armond echoed similar sentiments. “When we get support from the fans, or accolades like the Grammy nomination with the Chronixx album – it really does mean a lot. But we’re just two simple yutes who just love music, love being positive about life. It sometimes surprises us, because we don’t really take our minds off the music,” he said.