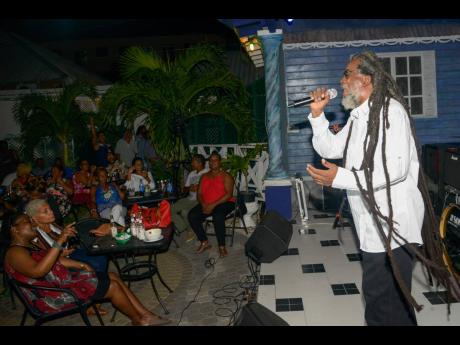 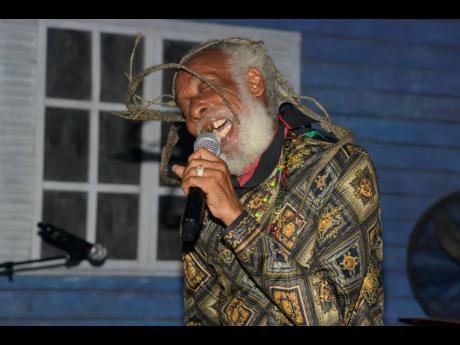 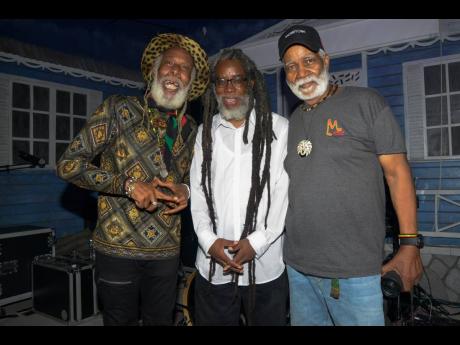 It was Off Broadway meets Reggae and Dancehall, when legendary toaster Big Youth and prolific singer song-writer Half Pint got up close and personal with fans at Cabaret Wednesdays, held at 2A Strathairn Ave, St Andrew. If the shouts of approval from the audience and their demands for ‘pull ups’ were anything to go by, it was obvious that the ‘one big family’ enjoyed an evening of musical pleasure that was beyond compare.

Although advertised for an 8 p.m. start, an extended intermission meant that the man of the moment – Half Pint – didn’t take the stage until 10:11p.m. But fortunately, the Greetings he brought were well received. Cool and serene, he delved into his bag of goodies and drew out the hits one by one, each song creating a bit more excitement than the previous. With Half Pint, it was a case of “you tink seh him done, but him jus a come.” By the end of his exactly one-hour-long set, it appeared as if every tune was a bona fide hit. Mr Landlord, Victory, Cost Of Living, Political Fiction, Level Di Vibes, One Big Family, Crazy Girl, Just Be Good to Me, I’m Not A Substitute Lover, Hold On and his ode to women – Sally, Suzie and W insome/Too Rud e, all formed part of his well-received set.

Half Pint seemed only too happy to be on stage, and he also used the opportunity to make a call for crime and violence to cease. “We have to still chant and sing songs for salvation,” the Rastafarian artiste said. He told The Gleaner after the show that the vibe was awesome and that he had been more than happy to return for an encore. He is scheduled to perform at the Ranny Williams Entertainment Centre on July 6.

Without beating around the bush, Big Youth, the quintessential performer, calmly made his way on stage, to shouts of approval. The toaster’s black jeans, patterned long-sleeved shirt and leopard print fedora were given a pop of colour with a green and red handkerchief tied casually around his neck. He was ready to work. The thing about Big Youth is that his entire body is totally involved in his performance. From the minute he stepped on stage, it was pure theatre. Like an actor in a well-rehearsed musical, U-Roy smiled his contagious, gold teeth-capped smile as he drew the band members and the patrons into his web.

His wasn’t a high-energy, bun down Babylon set. Instead, alternately chanting righteousness the biblical way, or targeting the social conscience the Rastafari way, Big Youth entertained. “Every nigga is a star … Natty dread locks dread, sitting in the house of dread … Lion In The Jungle …. Righteousness exalts and nation but sin is a reproach to all … but righteousness stands firm itinually … .” the Dread Inna Babylon reeled off at intervals, stirring the audience to action. Whether he was chanting over the rhythm, quoting scripture, or letting out his high-pitched screams, Big Youth was in constant motion, as if trying to soothe a perpetual itch.

The renowned toaster had a particular high when, in the midst of performing Curly Locks, he whipped off his hat and flashed his “natty”. S90 Skank had him “a dolly down the alley” amid the warning that “if you ride like lightning, you wil crash like thunder”, while his humourous take on Jammin had its fair share of commentary. “Black people never be ungrateful. Remember if you spit in the sky, it will fall in your eye.”

Big Youth brought his performance to a close with Hit The Road Jack and admonished patrons to have a “safe travel pon di gravel.”