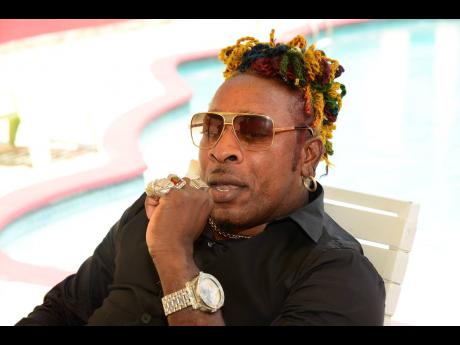 A saunter through his mansion in Havendale, St Andrew, revealed stereos blasting local radio station ZIP 103FM near the poolside while music from a flatscreen TV filled the halls of the main floor.

Ele himself is a walking music library. For almost every life experience he recalled, he trailed off in a beat, thumping his chest, snapping his fingers, and deejaying his best impersonation of Bounty Killer, Shabba Ranks, Beenie Man, Mad Cobra, Simpleton et al, with joy in his eyes and gratification on his face.

He attained no formal training for a talent that would earn him scores of chart-topping singles. Instead, the Seaview Gardens-bred artiste honed his craft by toasting among friends and isolating himself in a room with Celine Dion on repeat, as he taught himself to reach challenging notes.

“Musically, mi did always know a waa gwaan. My house did deh two gate from Shabba Ranks’ house. Bounty Killer live bout five minutes up the road. Ninjaman never come from Seaview, but anytime him come, we run up the road and look pon him from head to toe cause a our god that. We learn from them man deh, even Supercat. Dem tek music serious and nuh play round wid performance,” Ele told The Sunday Gleaner.

‘We’ included childhood friends Nitty Kutchie and Boom Dandimite, with whom he would later form Scare Dem Crew, with Harry Toddler from Waltham Park Road, Kingston.

Though he had an endorsement from Bounty (he even got a gig cutting grass for his mother, Miss Ivy), Ele’s mother did not approve of his musical ambitions.

Given name Oneil Bryan, the Norman Manley High School student earned his moniker through his ‘Dumbo’ nickname derived from his sizable ears. First deejaying on ‘Vietnam corner’ in Phase One, the 16-year-old took his skills to the neighbouring Waterhouse community at King Jammys studio, where things took a new turn.

“Jammys and everybody start record Killer, and Killer seh him buss, but him friend dem still deh deh. We seh come mek we start Scare Dem Crew cause we nah go buss solo,” he said. “Killer used to call we out pon shows, and a so we start get recognised.”

Ele fashioned the idea of members dyeing their hair to distinguish themselves from other crews, and Toddler was game. Kutchie kept his hair black, but Dandimite later got on board. With tracks like Many Many, Nuh Dress Like Girl, and Girls Every Day, the group bore success before disbanding in 1999.

Dancehall was on a new wave by the new millennium, and the following year produced Elephant Man’s solo album debut, Comin’ 4 U, on Greensleeves Records. His biggest record is the 2003 dance number Pon De River, Pon De Bank, which spearheads a slew of dance hits like Signal the Plane, Blase, Scooby Doo, and Fan Dem Off complementing earlier tracks Online and Log On.

His catalogue supports his affinity for music, with a range of sampled works like Bad Man a Bad Man, remixed from R. Kelly’s The World’s Greatest; Willie Bounce, sampled from Gloria Gaynor’s I Will Survive, and Bun Bad Mind, a take on the gospel single Hear My Cry Oh Lord by Marvia Providence.

His star factor was supported by his signature lisp, spirited performances, and variegated outfits, and it did not take long for international acts to notice. His collaborative projects boast names like Janet Jackson, Busta Rhymes, Mariah Carey, Lil’ Jon, and Kat Deluna. He also did a stint at P Diddy’s Bad Boy Records, which released his Grammy-nominated album, Let’s Get Physica l, in 2008.

Growing fame accompanied some bumps in the road. Father to 20 children, Elephant Man’s personal life has been blasted in the media, with claims that he is not an active father. Then there were the court cases, a repossessed car, and other rumours swirled. “We’ve been through it. When you’re a likkle youth coming from nothing to something, people a go talk things, but at the end of the day, never mek a rumour be true,” he said. “Me take care of my kids, but sometimes you and the mother have a dispute, and you know how that go. Memba mi deh ya good one time and dem seh Ele have AIDS. Me seh, weh dat come from? Mi nuh dead, mi deh ya. That’s how people is. Me stay strong cause the fittest of the fittest shall live, and God nuh waan no weakness inna Him camp.”

Now 42 years old, he recently completed a European tour and is getting ready for festivals like Reggae Sumfest and Reggae Rotterdam in July. He still assesses the dance circuit and gives kudos to artistes like Ding Dong and Chi Ching Ching for continuing to spread Jamaica’s dance culture.

And for that little kid or music fanatic who happens to stumble across the history books of the entertainer’s life, he hopes to be immortalised as “that hard-working dancehall artiste who took dancehall to that level like the Reggae Boyz. Just like yuh can pick out the footballers who did certain things, when it comes to dancehall, you should be able to pick out Ele in the top five and say he did this or that. I’ve gotten a fair run. Me sell gold, me get Grammy-nominated, me fanbase large, and there is proof to show it.”