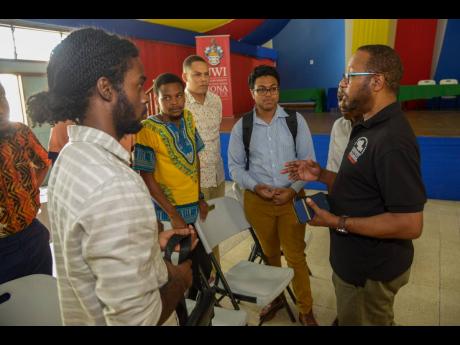 Last weekend, the audience at GATFFEST’s inaugural Film Pitch competition left The University of the West Indies (UWI) Assembly Hall with a bellyful of nachos and cheese, popcorn, and stories.

Tales of a sentient prosthetic leg, a guerilla journalist using social media to uncover lottery scams, and an addict’s bad trip sending them under the judgement of ancient African ancestors were the order of the day as eight emerging film-makers contested for grants to fund their proposed budgets to produce a short film for GATFFEST 2020.

The pitch competition was the final activity of GATFFEST’s inaugural film market, an element adapted from established international festivals to facilitate exchange and networking among film-makers, producers and potential distributors.

Festival director Savannah Peridot announced that the Bob Marley Foundation will contribute to the films’ production costs but in keeping with GATFFEST’s communal attitude, others were still welcome to offer support.

Beyond the business of it all, film commissioner Renée Robinson expressed satisfaction with the variety of ideas pitched. “It’s heart-warming to see a lot of the ideas coming out. Many times, our stories are steeped in violence or crime, things that are negative about Caribbean society, so it’s really good to see that there is a lot of creativity that identifies untold narratives and scenarios. It is very encouraging to see the diversity in plot and style in the creation of this new Caribbean cinema,” she said.

Heart-warming as it was, the competition was in its infancy, which left some judges offering sage advice to the emerging talents. Little-White encouraged the film-makers to focus on their physical selves in order to present confidently and deliver a captivating pitch.

“Your physical stance is important to the pitch. It’s not just the story but how you present yourself – the way you talk and the gesticulations. The story is important, but the storyteller is more important,” he advised.

Chin echoed in agreement, but noted further that many of the presenters were focused on pitching their stories’ ideologies instaed of the stories themselves. “It’s important to be very visual and auditory, because we want to see and feel the film,” he said.