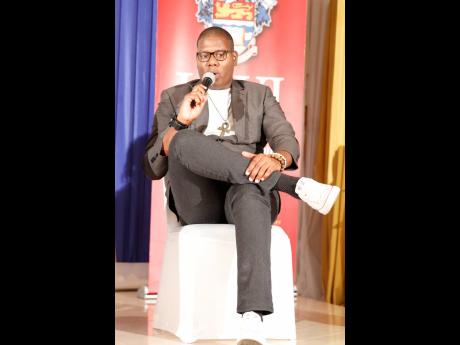 The seventh annual GATFFEST Film Festival kicked off last Friday evening at the Mona Visitors’ Lodge and Conference Centre, with videographers and photographers jostling to get the best shots of the carpet arrivals, among them distinguished guests from across the region. As in previous years, the organisers of the film festival invited individuals who are interested in exploring the world of film and learning more about its significance in highlighting various social and economic topics.

After opening remarks from the festival director, Professor Ian Boxhill, and Pro-Vice Chancellor and Principal of the University of the West Indies (Mona) Professor Dale Webber, the festival opened with the debut of two environmentally focused productions. The films, which showed the expansive creativity of Caribbean people, were followed by a brief panel discussion. Titled Beneath the Surface, directed by Jamaicans Safel Peterkin and Del-Llandri Duncan, and Island Strong , by Clish Gittens from Barbados, the films succeeded at touching the hearts and minds of viewers present by utilising cinematic language that falls at two different ends of the film spectrum.

Beneath the Surface , inspired in 2016 when the UWI Community Film Project partnered with the Montego Bay Marine Park to train six students from the Western Jamaica Campus in scuba diving and underwater filming, is directed from a natural, mainly unscripted, standpoint and concentrated on the curiosities of two male students learning about marine biology, specifically Jamaica’s coral reefs.

It featured sit-down interviews with Peter Gayle, the principal scientific director of the Discovery Bay Marine Laboratory; Senator Matthew Samuda; and the Chief Executive Officer of the Jamaica Environment Trust, Suzanne Stanley. They shared their educated views of the underlying problems causing destruction to the coral reefs and, subsequently, other marine animals.

For a documentary which takes as its core the authenticity of Jamaican culture, inclusive of music and dialect, Beneath the Surface would probably be labelled the underdog of the two films that premiered, being created by newcomers to the film industry. The central elements are strong: two young men getting first-hand knowledge of marine life, while exploring the solutions to protect said creatures and highlighting the island’s recent ban on plastic. And the background music, a dancehall collaboration called Journey of a Thousand Miles , where Duncan, aka ‘Shari-I’ exercises his lyrical skill to emphasise that environmental protection “begins with you”.

“It was only natural to utilise entertainment as part of the documentary, not only because we knew it would capture the audience’s attention but to let the message sink in,” Duncan explained.

He added, “If you think about it, the one thing that our youths gravitate to is music, and once it sticks in their brains, they will automatically share it with other people.”

Though ‘edutaining’, the production lacked subtitles of the featured presenters and the essential translations that would be beneficial for viewers who are unfamiliar with the Jamaican Patois.

Meanwhile, Gittens unearthed the emotional senses. The idea of Island Strong, which shows a mother speaking to her six-year-old daughter about wanting the best for her, Gittens says, “was to create a scenario akin to Mother Nature having a conversation with the Caribbean.

“From a director’s standpoint, I wanted to engage the viewer on a different level, and it was really inspired by a previous encounter I had watching a child running around carefree playing with her dolls, while around her home was in disarray – sort of like the people of the Caribbean going about their business until the time when disaster strikes. I figured if it could speak to me, it would speak to a wider audience,” Gittens told The Gleaner.

In speaking about sharing the information about the vulnerability of the Caribbean islands to the increased risk of climate change and natural disasters to a wider cross section of film aficionados, the multiple award-winning Bajan filmmaker notes, “Scientists have their own vocabulary, we as filmmakers have to make sure the data reaches or connects to the people in a way we can all understand.”

It was one of the main concerns brought to the fore during the panel discussion which placed the three filmmakers on the stage, front and centre, along with the instructor of the UWI Community Film Project, Ina Sotirova, who is also an award-winning documentary film writer. It allowed for members of the audience to share their views on the film-documentaries and pick their brains on how they would continue to raise awareness using their talents.

The general response of the filmmakers was that there was need for the introduction of, as well as an increase in, projects that take on the form of workshops to involve the younger generations who would optimistically take the knowledge acquired to greater expanses. The GATFFEST Film Festival, hailed as the largest community film festival in the Caribbean, continues its schedule of activities into this week with film nights at Palace Cineplex, the Montego Bay Convention Centre and the Bob Marley Museum. It closes on Sunday, June 30, with an award ceremony.