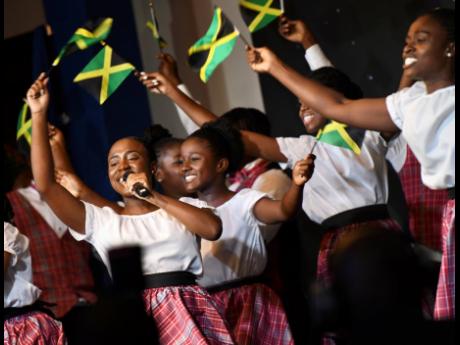 Ricardo Makyn
Members of The Ashe Company performing recently at the opening ceremony for the 8th biennial Jamaica Diaspora Conference, at The Jamaica Pegasus hotel.

Come next month, the Ashe Company will head to Florida for an exciting 2-for-1 musical showcase, dubbed ‘Boonoonoonoos’, which is scheduled for July 20 at the Intercontinental Hotel in Miami.

According to the group’s executive director, Conroy Wilson, 20 members from the performing arts company will trek to the Sunshine State to put on the show. “We believe musicals offer great entertainment value. The combination with a Jamaican-style cabaret makes for exciting Caribbean Musical Theatre and we will be featuring two shows for the price of one, which should not be missed,” Wilson told The Gleaner.

He explained that Part One is a repurposed edition of their 2015 musical, Ded Leff, while Part Two is a variety show featuring a mixture of music of all genres.

Ded Leff chronicles the life of a young man who, upon his mother’s death, returns to Jamaica to lay claim on her estate. However, before he can claim his inheritance, he must fulfil some of his mother’s last wishes, which ultimately allows him to reconnect with his Jamaican roots.

Michael Holgate, artistic director of ASHE and writer of the musical, says the story has been upgraded to suit the audience to which its geared. “We are recontextualising the story by changing and upgrading the music used. The general storyline remains the same, but this Reggae Theatre frame we will be using allows for more appropriate music to be infused as time goes by,” he said. He also explained that with the cultural expressions being used by today’s youth having changed from that used by their predecessors, the musical had to be tweaked to reflect that change, especially as it will now be showcased to Jamaicans in the diaspora.

“The cultural references that are used by younger Jamaicans today keep changing, and as we continue to build new audiences at home and abroad, we are ensuring that we tap into the full range of who we are as Jamaicans at home and in the diaspora,” he stated. “The production moves and changes in a dynamic way as we tap into the energy and vibe of all our Jamaican people and bring them ‘home’ through the production.”

The event is being put on by The Universal Foundation for Better Living, Inc and The Ashe Otaheite Foundation, Inc. Both organisations are US-based entities engaged in charitable work locally and internationally. Proceeds from the show will go towards strengthening both organisations. Jamaica’s Consul General to the Southeast USA, Oliver Mair, will serve as patron of the summer artistic showcase. The show is expected to start at 7 p.m.