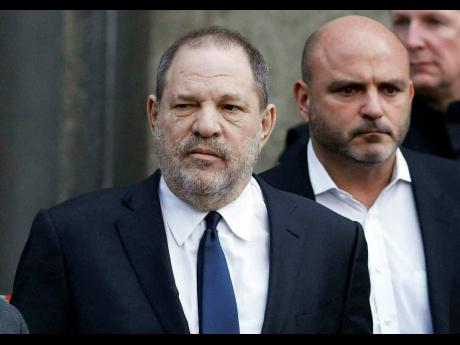 File
Harvey Weinstein pictured leaving the New York Supreme Court last year, where his lawyers were arguing against the sex trafficking claims of an actress who the disgraced movie-making mogul said was capitalising on the legal successes of other women.

Harvey Weinstein admitted that he is “not a saint” – but stressed he wasn’t a “sinner”, either.

Audio of a call between the disgraced movie mogul and journalists Jodi Kantor and Megan Twohey – who were behind the October 2017 New York Times exposé which accused him of multiple allegations of sexual misconduct – has been leaked, and in the recording, the 67-year-old producer is heard quizzing the reporters for more information about his accusers.

In the audio, which was published by Inside Edition, Weinstein said: “I think you ought to be specific and tell me who they are and if they’re on the record ... .

Elsewhere on the call – which the journalists didn’t know was being recorded – the producer could be heard challenging their reporting.

He said: “There are mistakes you’ve made. I promise we will find them ... .

“It seems like you have a lotta hearsay on your hands. I’m gonna say this nicely: Get the facts right. You’re journalists.”

Inside Edition is planning to publish more of the recording – which was made two days before the exposé was published – on Thursday.

Weinstein has been accused of sexual harassment, abuse, and rape by more than 50 people, but he has denied all allegations of non-consensual sex, while his production company has also been accused of failing to protect its employees.

Of those who have accused him of misconduct, victims have filed more than 15 lawsuits, which are accusing Weinstein or his production company of misconduct, while Weinstein himself faces criminal charges including rape and performing a forcible sex act.

Earlier this year, Weinstein reached a “tentative” deal with his sexual abuse accusers to pay $44 million in compensation.

Lawyer Adam Harris, who is acting for the Weinstein Company co-founder Bob Weinstein, told a bankruptcy court judge: “We now have an economic agreement in principal that is supported by the plaintiffs, the (New York attorney general’s) office, the defendants and all of the insurers that, if approved, would provide significant compensation to victims, creditors and the estate and allow the parties to avoid years of costly, time-consuming and uncertain litigation on all sides. There is (still) a lot of work here to do. But I, personally, am very optimistic.”