Issachar to give ‘Praises’ at Twelve Tribes acoustic live broadcast 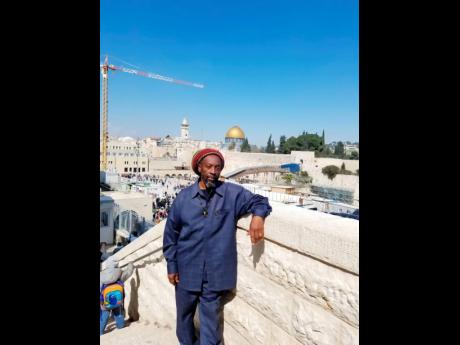 Issachar on his visit to Israel.

Twelve Tribes of Israel member Orthodox Issachar will be one of the performers at tonight’s live acoustic segment to be held at the entity’s Hope Road headquarters in St Andrew. The roots-reggae singer, who divides his time between Canada and Sashamane Land in Africa, is on a visit to Jamaica which will also see him hosting the official release of his newest single, Praises.

“I have to give thanks for the opportunity to be a part of tonight’s event. It is always a joy to perform in Jamaica,” the Rastafarian singer, who has back-to-back performances in the island, stated. On Saturday, he will be performing at Jamnesia in Bull Bay at the release party for a song whose message is integral to his belief system. He told The Gleaner that with this single, he is taking time to glorify the Most High. “By giving praise, we are giving thanks for life, mercy, grace, goodness. All have sinned and fall short, but through Christ, we have a chance at redemption,” he said.

Praises was recorded at Tuff Gong Studios and was produced by Sangie Dave, arranged by Earl ‘Chinna’ Smith, and mixed by Steven Stanley. Musicians on the project include Danny Axeman, Chinna Smith and the Bingie Straw drummers.

Recently returned from Israel, which he was visiting for the very first time, Issachar admitted that the song was written prior to his visit but that all that he has seen and done gives everything even more meaning. His stage name, ‘Issachar’, is actually the name of one of the 12 tribes of Israel found in the Bible.

“I visited Israel, and for me, it was very significant. I have been reading about these places in books, where the children of Israel travelled to the Promised Land, and I got to see that this is real. It is not a dream. I climbed Mount Tabor, where the Transfiguration took place, and this was actually in the land of Issachar, and I was able to trod this land with my own two feet,” he said.

He continued, “I saw the City of David, where Solomon built the Temple, visited the Mount of the Beatitudes and the Sea of Galilee. I went in it. It was night, but I tek off mi shoes and roll up mi pants. I was able to lie down on the Dead Sea and went to the River Jordan, where Jesus was baptised.”

Issachar also revealed that reggae music definitely has a place there and spoke of the African Hebrew community in the land of Judah, which is very appreciative of the music from Jamaica.

“Jesse Royal did a show while we were down there in March, and he got a good turnout,” he said.

With regard to this evening’s Twelve Tribes event, one of the organisers, Sangie Davis, told The Gleaner that he anticipates a particularly good show. “Tonight is very special,” he said. “We will be having the final in our monthly series, which started in June last year.”

The series is aired live on radio, and the menu board includes interviews, health tips, features, and, of course, live performances.

“The live broadcast takes place every last Friday from 6 to 10 p.m., and there is no charge. We go on air at 6 p.m. until 10, and our live acoustic session runs from 8 to 9. We have featured a lot of entertainers over the past year,” Davis elaborated.

Performers who will be showcasing their talents tonight are Fred Locks, Mark Wonder, Della Manley, Garth Dennis and Mikey Spice.