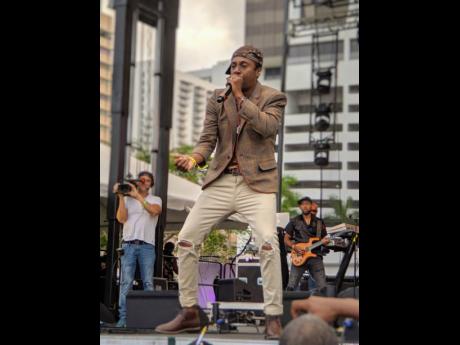 By the year 1997, dancehall toaster General Degree was already established with a signature style of fusing wit and sexual ego exuded on tracks like When I Hold You Tonight, Mr Do It Nice, and his breakout hit Granny. That year, Degree would compose his most commercial record to date, Traffic Blocking, a dedication to belles on the Filthy rhythm produced by Haldane ‘Danny’ Browne on his Main Street Records label.

As with his other records, the deejay said it was born out of a little fun.

“Whenever Danny had a rhythm, him would call everybody on the label and ask us to come through, and I remember going in then going back the next day with Traffic Blocking,” he told The Sunday Gleaner. “Dem times, there was no such term as ‘traffic blocking’. People would say ‘blocking traffic’, but true me waan rhyme wid ‘stocking’ and ‘whapping’, dat’s how me come up with the term traffic blocking. I made it up as a joke, nothing stressful, just like when I made Granny.”

After laying down the final vocals, Degree called it a day and went home, with no inkling of the impact the song would have on his life and that of others.

Since last week, his name has been reeling off the tongues and fingertips of social media users, who instantly associate Traffic Blocking with Megatron, a new single by American-based rapper Nicki Minaj. On her track, Minaj samples the Filthy rhythm, which also features artistes like Mr Vegas, Lady G, and Red Rat.

“When I recorded it, I didn’t know if it would be a hit I just do music. I don’t really think about it,” Degree said. “It was done out of love, happiness, and enjoyment, and when it come out, it worked, and me work with it. When I travel, as soon as I say ‘traffic blocking’, everybody knows that song. It’s one of those things where they might not know who sings it, but they know the song. From the day it was released until now, it remains my closing song anywhere I go in the world, and I still get the same response over and over again like it was just released.”

The song has even morphed into a brand for Degree, who uses the title when he embarks on international tours. The last was in 2017 and had stops in Costa Rica and Central and South America.

Though he has released a slew of singles since, Degree admitted that he longed to top the success of the 1997 single.

“I always tell people my biggest challenge is to do a song that go round dah song deh or get bigger than that,” he started. “I’ve done good songs, but because that song stands out so much in people’s brains, me always seh how me can do another song like that. I try to not pay it no mind cause me know no matter how mi give people new songs, dem a go have Traffic Blocking inna dem brain and always compare. Even young people tek on to it, and I don’t know how dem hear it. It reminds me of I Like To Move It by Reel 2 Reel, one of those songs that crosses generations and stands the test of time.”

Fresh off Miami’s Best of the Best concert last month, Degree is now focused on completing several projects like a three-track EP dubbed Body Work, to be released in the near future.

“I don’t get caught up in the hype. I stay steady-paced, and I’m still doing my thing,” he said. “I just released a song called Our Place for a South African producer, and it has a nice dancehall, 90s vibe. I also have an EDM song coming out soon with Henry Fong from California, and I’m working with another producer from Italy,” he disclosed.