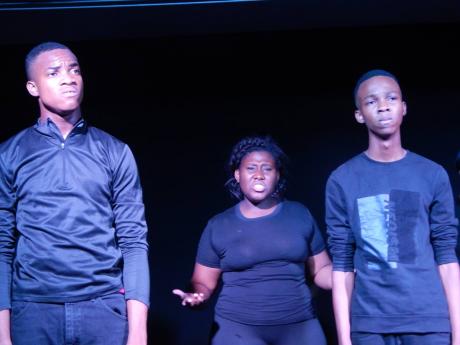 Contributed
Three members of the chorus chanting a poem showing anger at the abuse of children. 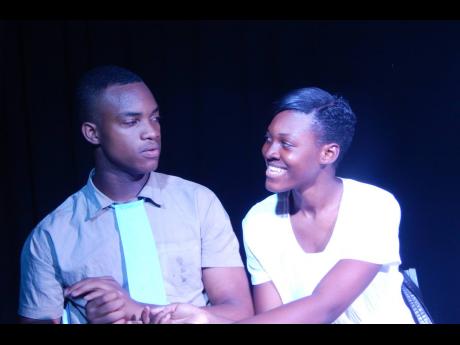 Contributed
A teacher (played by Jeszon Campbell) comes on to David, her 16-year-old student.
1
2

When the Edna Manley College’s School of Drama graduate, Lemar Archer, started teaching, he sensed deep distress among many of his students. In the theatre arts and drama classes he taught at Edith Dalton James High School in St Andrew, he investigated the causes and, shocked at what he discovered, decided to base his first commercial play on his findings.

The play, A Child’s Cry (to Rescue Our Youth), was staged over the last two weekends of June in the school’s small theatre. Acting in it were some 20 of the students who helped Archer to devise the production.

“I listened, learned, experimented, played, laughed and cried in the creation process of this work,” states Archer, who went on to write the script and direct the production.

The play is essentially about the abuse that children, especially students, suffer and Archer assured me that “every single thing” I saw in the play came from his students. He said that in the process of devising the production in drama club sessions, other students who were not members of the club were encouraged to come and share their knowledge and experiences.

“In the process, I could feel healing taking place,” Archer said. As a direct result of that, he was able to end the play on a note of hope.

A Child’s Cry differs from the average straight drama in two fundamental ways. First, it is focused on delivering its message, not on entertaining the audience. Secondly, it has a musical format, with dance, movement and song interspersed with dialogue scenes.

A uniquely Jamaican addition to this format is dub poetry. Whereas in a traditional musical, characters might burst into song, in this production, they launch into dub poems. Yet another Jamaican element is the use of children’s games, like Bull in the Pen and The Farmer in the Dell. Some of the music is sung live, some is recorded.

Always energetic, and often too-loud (in the small space, the characters on stage don’t have to shout), the play begins with a chorus, reminiscent of the plays of Ancient Greece, setting the scene with comments in poetry and chanting. The simple technique of the performers walking around the stage and casually calling for their parents, then, when there’s no response, screaming desperately “Mummy! Daddy! ” is very effective.

Later, we are introduced to two major characters, Sherika (played by Amoy Davis and Kay-Ann Young) and David (played by Brandon McFarlane and Javier Cockburn), both 16-year-old students with problems. Sherika’s father is abroad and she lives with her mother , Marjorie (Rogina Denton) and grandmother Sandy (Shamoy McFarlane).

David lives with his neglectful father (Eric Davis), who believes that David should leave school and go to work. He throws away the CSEC form David gives him to sign, and he won’t give David the money to pay for the eight subjects the boy wants to take.

Sherika’s family members pimp her to an old friend, Michael (Shawonne Shann), in exchange for money, and Michael is continually shown walking on stage from a bedroom, zipping up his pants, then putting money on the table. It is always grabbed up greedily by Sandy, who is totally oblivious of the weeping Sherika who stumbles on, also fixing her dishevelled clothes, as Michael leaves.

For David, his troubles worsen when a clearly caring, and attractive teacher (Jeszon Campbell) entices him to kiss her. They are observed and in no time the entire school knows about it. In an effort to save her job, the teacher blames David before the principal and a member of the School Board. David is expelled and he takes up with a street gang.

Later scenes show Sherika swallowing a bottleful of pills and David accepting a job involving a gun from other gang members. When he goes to a set of thugs to deliver the gun and asks for money first, he is beaten up and shot.

Clearly these stories could have pushed the play into the realm of tragedy, with the main characters dying. However, Archer gives the story a sudden turn-around, and things end well for Sherika and David.

In his writer-director’s notes, he explains why. The effect of child neglect and abuse on our children may cause “depression, behavioural problems, homelessness, self-hard, drug abuse, aggression, violence and even suicide,” he states. But he wants the play to be “a catalyst for change.” Audiences are to “address the issues…and transform lives.”

Interestingly, at the end of the play, the school principal came on stage to congratulate the cast and production team and mentioned a benefit flowing from the production that Archer might not have anticipated. He told the audience, some of them parents, that the performing arts students tended to do better than others academically. The arts apparently “improved their focus,” he said.