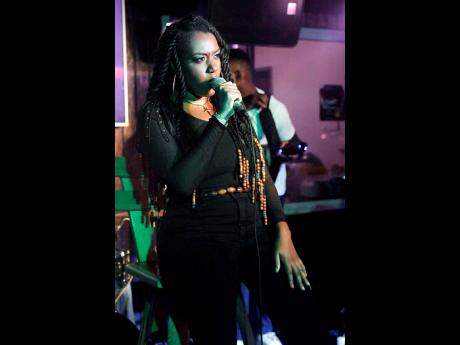 The hypnotic, melodious, yet powerful voice of Yeza is about to hit the speakers. Consider it a warning. Once she sings –militancy in excess – and teases with a little twist of her hips, there will be no way to resist facing the stage as the roots-reggae artiste and the Xolani Nation (formerly Flash Mob) band perform live.

“It’s been a while (over a year to be exact) since I have done an acoustic show in an intimate setting,” Yeza tells The Gleaner.

The last time Yeza was in living colour was at the Dre Island Acoustic Live at Skyline Levels in the hills of upper St Andrew, but despite her long absence from the live-show scene, she showed no signs of angst on the microphone at the Ambassador Bar and Grill at its recent staging of UNPLGD.

In the past, the singer would have to call on independent musicians to put together the complete band component, but now, she said, “The stars have aligned, and with Xolani Nation’s interest in working with an artiste matching mine, the sound has become somewhat complete.”

She affirms, “The name Yeza (derived from Yezambique) in Swahili means strength and resilience, and the name decided by the band, ‘Xolani’, is also derived from the same language, meaning peace, all messages heard in the music.”

Heavily influenced by African culture and teachings, their music has a depth and meaning unlike any other artiste-band complement, and their true element is best observed on a stage where the audience calls out for multiple encores.

Xolani Nation consists of back-up vocalist Jourdanne Hart, drummer Aston ‘Spenny’ Spencer, guitarist Stephen Robinson, and keyboardists Kevin Hayles and Jhevaughn Murphy. Together, the musicians create the distinctive roots-reggae beat that grounds the music that allows Yeza’s vocals to glide from soft and whispering to strong and commanding, effortlessly. Two words come to mind: sexy and militant. Yeza wastes no time to share lyrics that are relentlessly positive, singing with love but unapologetic when confronting social issues as soon as the first bass line drops.

Speaking of lyrics, she says, “The content is best defined as rebel music similar to what people would hear in the catalogue of an artiste like Kabaka Pyramid, but the difference is I am able to mix my lyrics with melodies that portray a revolution between femininity and militancy … that is who I am as an artiste and a woman.”

The Bull Bay-born-and-raised entertainer has always been a rebellious soul, she says, “not in the sense that I was bad as a child, or while growing up, but that I never liked when things were forced upon me,” and her determination to make an undeniable impact in reggae music is equally intimidating.

Although focused on roots-reggae, Yeza lays her voice over some one-drop rhythms and freestyles with the best breath control, demonstrating no fear of mixing in some dancehall style of singing on beats that follow the pattern of reggaeton music. The sound is refreshing, without losing her roots, which music lovers will soon get a chance to listen to on her impending EP produced by Rory Stone Love.

Her songs, Rebel Empress, Everythin g is Irie, Is It Because I’m Black , and Nuh Trouble We , show her ability to be cheekily salacious, passionate, and political, and at the end of each performance, she reiterates the words “rebel up”. Likewise, her image, sporting natural braids (almost identical to locks) and wooden, hand-made jewellery sometimes makes the audience label her as Rasta, but she is, as she sings, a rebel empress.

She explains: “A rebel empress is a female who can be the change for any society. Rasta has been the pinnacle in Jamaican consciousness, and for that, I respect them, but I don’t like being put into a box. I am very spiritual, free with my spirituality and cultural rules. I take a lot from other teachings – Chakras and Kemet – while still connecting with my African roots.”