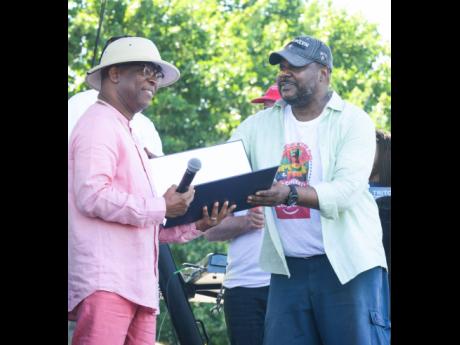 Veteran broadcaster Barrington ‘Barry G’ Gordon, was on Sunday presented with a United States congressional proclamation from Congresswoman Yvette D. Clarke of the Ninth Congressional District in New York. The presentation was made to Gordon by Eugene Kelly, vice- president, global diversity and inclusion, the Colgate Palmolive Company, at Groovin’ in the Park festival held at Roy Wilkins Park in Queens, New York.

“I always contend that encouragement sweetens labour, so to receive this award certainly sweetens my work in broadcasting and reggae. I am elated to know I’ve made my mark in the industry,” Gordon said after the presentation.

Barry G, in 1975, having just graduated from Kingston College, landed his first job on radio at the now defunct Jamaica Broadcasting Corporation (JBC). He stayed there until 1987 before joining RJR. JBC lured Gordon back in 1989, and he stayed until 2001. He has since worked at Power 106 FM, Hot 102 and Klas FM. He is now a host at Mello FM in Montego Bay.

“I always innovate and never copy anyone’s style. In an unselfish way I deliberately go out of my way to inform and educate,” he once said about the secret to his longevity on radio.

With more than 44 years of experience on radio, and being involved in the entertainment industry, Gordon shows no signs of slowing down anytime soon.

When asked about what’s next on his to-do list before he turns off his mic, Gordon said, “The drive is to deliver a level of radio from my generation of broadcasters to inspire the young ones who are coming in radio these days. My message is, “Radio is bigger than all of us!”