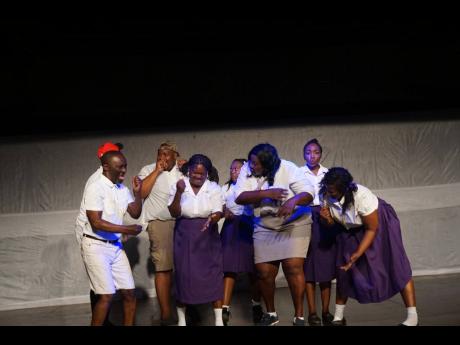 The Phoenix Theatre on Haining Road in New Kingston was the venue for the uplifting production Ketch Di Riddim, a theatrical revue. The production began in an unorthodox manner, garnering full audience participation through a collective intake of oxygen that moved to the heart, establishing a rhythm of another form. Then, the symbolic rhythm of the multi-acts began.

The acts were, at times, rib-tickling. They came in the forms of songs, satirical sketches, a dance, and some monologues, with a number of them being satire on church, relationships and social ills. Director Dorraine Reid was entrusted with guiding the cast, who, except for veteran actor Owen ‘Blakka’ Ellis, were not professionals. She did well. And so the performing arts ministry’s sojourn into their first live, full-length production was performed with great aplomb.

The cast role-played, convincingly, characters as young as primary-school children in the sketches Pickney Prophesy and believable prostitutes and police officers in Back Road Ministry. The performances were aided by appropriate costumes and props. Ketch Di Riddim, however, had a not-so-strong start. For the opening act, the cast stepped off the rhythm of the accompanying track in singing the title song. However, that was not the case in the follow-up, an existentialist monologue titled What If, Imagine, Suppose performed by Ellis, who played the street vagrant.

The church-based group shone the spotlight on itself in M.O.G., satirising attitudes towards the use of dancehall in gospel music by some Christians, as well as debunking the myth that church leaders are only men in sketch three, Women of God. The monologue, Nah Go Church delivered by a drunk backslider, played by Ellis, was hilarious. The use of special effects to create a surprise ending was effective.

In the hilarious sketch Men Wanted, it was not only the tenement yard setting that was believable; so were the performances from Ingrid Campbell, Hanif Myles, Julian Currie, Samara Johnson, André Daley and Jerron Hamilton. The intriguing twist in the title also made the sketch unforgettable. The rhythm of relationships was also explored in Lyrics, No Means No.

The revue ended with a very catchy song Life, performed by the cast.

Overall, the production was quite entertaining and strong on message. Blocking, costumes and setting added depth to the creatively written scripts.

In addition to Saturday’s staging, the play was shown on Friday, opening night. It is scheduled to continue at the same venue on July 18 and 19, 2019. Go catch the rhythm.