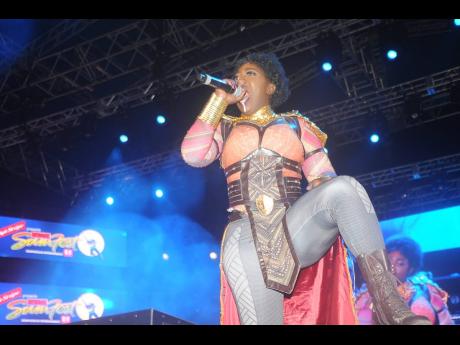 Dancehall’s leading lady, Spice, dubbed herself Queen of Stage and to date, it’s a title she has owned in every way imaginable. Carefully planning every performance, Spice takes into consideration every element in her set, from costuming to lighting to props.

Like those of every other artiste in the entertainment industry, her numerous performances will call for her to deliver certain songs over and over, but that has never caused her to lose the all-important element of surprise. On huge platforms such as Reggae Sumfest, her stage entrances are usually highly anticipated and fans are often left shell-shocked at how she manages to re-invent herself each year. As we turn the spotlight on the ‘Women of Sumfest’, the Queen of Stage details how she prepares for Reggae Sumfest each year.

As the top female dancehall artiste, Spice is afforded what could be considered a rarity in music—being paid according to her worth. She told The Gleaner that each year, her payout from Sumfest is one with which she is comfortable. Still, every year she goes home with little to no money from her Sumfest purse as she pushes all her earnings back into her performance. But why? The entertainer explained that, for her, the crowd’s experience will always mean more than a pay cheque.

“I spend so much money on Sumfest preparation that by the time I finish paying out, I’m normally left with no profit, and I do get paid enough. But that goes to show that I don’t have a limit on execution. I go all out on my props and costumes for Sumfest and even though I don’t leave with a profit, I leave with winning my fans’ hearts, and that’s OK for me,” she said.

Reminiscing on some of her most memorable Sumfest executions over the years, Spice revealed that although she manages to always come up with something hot for her fans every year, it takes a lot of work and she does feel the pressure from trying to outdo herself time and again. “I do feel pressured sometimes, because it’s like I’m one of the biggest anticipations at Reggae Sumfest.

All about the fans

I know it’s because of my elaborate entrances, but the way how people comment and talk, the stakes are very high. ‘I can’t wait to see what Spice coming with this year’, that sentence is so popular in Jamaica and that’s where a lot of the pressure comes from, because I don’t want to disappoint them. While others can just walk out and do their songs, each year I always have to make sure I come with something that they will love. But I can’t complain, because I already made that impression. I’m already labelled as the Queen of Stage so I have to live with the brand I created.”

Speaking of brand, Team Spice is a well-tuned machine, according to the entertainer. She revealed that as soon as she gets off stage from one Sumfest performance, plans are in motion for the following year.

“The process is getting outfits made for myself first, then create a similar style so the dancers match accordingly. I then create the set after the outfit is made to correspond with the outfits, and the hairstyle follows easily after that. The team and I do rehearsals up to four weeks before the show then, three days before the show, we do a full-set rehearsal with the band. On the day of the show, I visit the stage in the morning to make sure my props are in position to execute a good set,” she outlined.

“So, last year, we did the Black Panther theme because, you know, that was the big moment of 2018.”

Without giving away too much, the entertainer urged fans to think about her most popular hit this year and explained that, with the summer already a scorcher, there’s only one thing she could possibly do when she graces the Sumfest stage on Friday, July19, at the Catherine Hall Entertainment Complex in Montego Bay, St James.