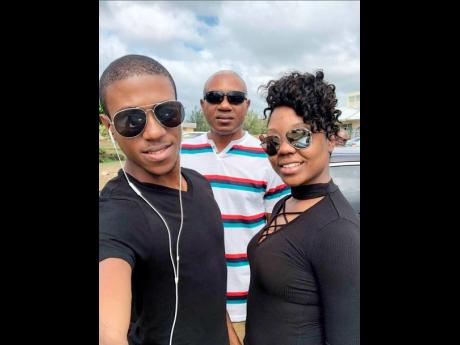 Contributed
From left: Oraine Frater of L’Acadco shares a frame with his late father, Wayne St Hugh Frater, and his sister, Janielle.

Grief is something every individual will have to contend with at one point or another in their life. Until now, the only grief that Oraine Frater was familiar with had come from dancing – a result of long hours spent practising to point his toes properly for a pirouette and to keep his chin aligned and tailbone tucked under, all while learning routine after routine – all of which was worth the pain.

Following auditions for the world-renowned Broadway production of the Disney’s Lion King in February, Frater, who is a dance teacher at Campion College and one of the assistant artistic directors of L’Acadco: A United Caribbean Dance Force, received a life-transforming call in April. He was told that he had been selected for one of the available roles for The Lion King on Broadway United Kingdom and Ireland Tour and would be required to leave by the first week of July for the start of rehearsals. The show’s curtains will open in Bristol in September.

Frater said, “I was one of those children who would watch The Lion King and imitate the gazelles running and jumping across the safari; that’s how I lived my fascination with the animated movie. And as an adult, to be granted the chance of a lifetime, to live that childhood dream through performing and just being involved in the whole process of the production was indescribable.”

Having just completed studies at the University of Technology, Jamaica, in culinary arts and management meant he could end the school term without any drawbacks, so he commenced preparations to leave. It was perfect timing – or so the 29-year-old dancer-choreographer thought. But as he geared up for the journey of his dreams, he was faced with a reality that suddenly made those dreams seem unimportant.

“One month after finding out that I would get to live out one of my biggest dreams, my dad was diagnosed with stomach cancer,” he disclosed to The Gleaner.

Little did he know that L’Acadco’s 2018 season of dance titled ‘ Daaancing Crystals: A Special Love Experience’ was the last time his father, Wayne St Hugh Frater (a law-enforcement officer with over two decades of service), would watch him dance on stage.

There were no signs that pointed to his father being critically ill, he explained. “In January, doctors had told him he had acid reflux, but in the months that followed, his eating pattern changed, and digestion was affected to a point where his body was not fighting off certain things, just gradually running down.”

The dancer’s father succumbed to the illness on Sunday, June 9, following the diagnosis – exactly one week before Father’s Day. This past year has certainly been life-changing, Frater shared; in addition to dealing with the loss of his father, his aunt (his father’s sister) had passed away eight months prior after also battling cancer.

In a slight change of tone bordering on sadness, he said, “Of course, I have lost relatives, but this one is close to home; the grief is completely different. My dad had grown to understand my love for dance and believed it was better than having his son involved in wrongdoing or on a corner idling. He couldn’t hide the joy anytime a feature where my name or a photograph of me was included.”

He added, “Both of my parents were supportive of my decision to explore dance as a career, but over the years, my dad dedicated a lot of his time to take me to rehearsals and auditions. Adding to that, he never complained about the late-night pick-ups.”

Living by the mantra ‘to see me dance is to hear my heart speak’, Frater admitted that initially, he was not sure the grief would have been conquered. Thinking out loud, he said, “The funeral happens the day before I leave, so it should be bothering me, but I haven’t allowed it. I have just been on the go – dancing and making preparations.”

He continued: “I am numbing certain stuff, but I am okay. On the other hand, my mother isn’t handling it particularly well, [but] my little sister seems to be holding strong. I don’t know how I will react later on, maybe I have become numb to everything. While some things may leave me because of sickness, my talent, dance, will always be there as a memory and an escape.”