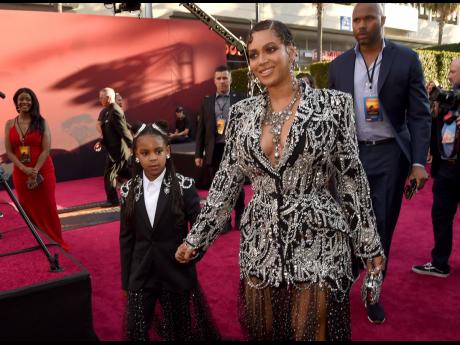 AP
Beyoncé and her daughter, Blue Ivy Carter, arrive at the world premiere of ‘The Lion King’ on Tuesday at the Dolby Theatre in Los Angeles.

The 37-year-old superstar – who lends her voice to the role of Nala in the new adaptation of the Disney classic – was in attendance at the glitzy event in Los Angeles on Tuesday, and her castmate was blown away by the reaction she received from the adoring crowd.

Appearing on ‘Jimmy Kimmel Live!’, the actor, who voices Pumbaa in the movie, said: “Beyoncé was called out, and the audience stood up and went crazy.

“I was like, ‘She’s getting a standing ovation for just existing.’ Like, her mere presence was a reason to stand and go crazy, and I totally got it. I was like, ‘Yeah, we should be celebrating. We made it. We’re all in a room with Beyoncé. That’s what you want.’ “

Although Seth, also 37, knew the applause was for the Crazy In Love hitmaker, he made sure to let himself soak in the moment.

He added: “I know they weren’t clapping for me, but I was on the stage, and I, for a brief moment, felt like what it must feel like to have that adulation.

Meanwhile, Donald Glover, 35, revealed this week that he was star-struck for “10 minutes” when he saw Beyoncé and her husband Jay-Z in her favourite pizza restaurant.