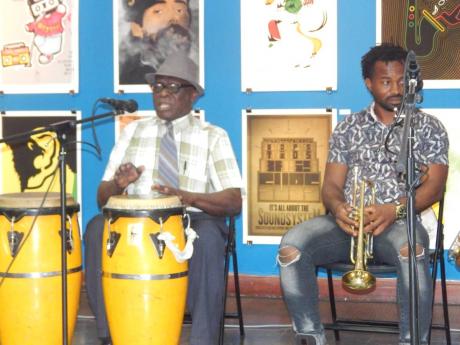 For its ‘last Sunday’ event in June, the National Gallery treated its audience to a performance by one of the most influential personalities in Jamaican popular music, Winston ‘Sparrow’ Martin. Leading a quartet called the Skasonics, Martin entertained the large and appreciative crowd with his songs and playing of the conga drums and trumpet.

Others in the group were Lance Smith (trumpet), Rayon Thompson (saxophone) and Devon Campbell (keyboard), all from the former Alpha Boys’ Home, now the Alpha Institute School of Music.

The talent they demonstrated may cause them to join the ranks of dozens of other young men who studied at the institution and went on to international fame. The names are legion and include Don Drummond, Joe Harriot, Bertie King, Lennie Hibbert, Cedric ‘Im’ Brooks, Alphonso ‘Dizzy’ Reece, David Madden, Leroy Smart, Tommy McCook , Winston ‘Yellowman’ Foster, Dwight Richards, Tony Gregory, and brothers Ian and Albert Shaun Hird. Many received national honours.

Among the bouncy ska tunes and songs performed were Sly Mongoose, Brown Skin Gal, Island in the Sun, Cherry Pink and Apple Blossom White and Bob Marley’s One Love. One of the most popular pieces, Don Drummond’s Eastern Standard Time, had many dancing in the aisle. A special treat was the ‘duelling’ of the trumpets between Martin and Smith as they played Wonderful World.

After the concert, Martin told me that anyone wanting to understand Jamaican popular music had to visit and study the history of the Alpha Boys’ Home. “That’s where our popular music was created,” he opined, adding that the name ‘ska’, for the immensely popular musical form worldwide, was chosen by a long-serving principal, Sis Mary Ignatius.

Former Alpha musicians, he said, like Drummond and Alphonso,who were playing jazz in the hotels, would get together on their day off, drink, cook food and then have a jam session. One newcomer, Jackie Mittoo, couldn’t play the American boogie like the others and instead played a one-two beat, which evolved into ska.

University of Technology music lecturer Martin, who spent 10 years at the boys’ home as a child in the 1950s, and later taught music there for 37 years, told me: “What I’m trying to do is to get these youngsters to understand that the music is theirs and they need to nurture it and keep it going in Jamaica. If not, many years from now, it will be still going (overseas), for the world is trying to learn our music.”

He was not only talking about ska, for which the home is best known, he said. Past students have played in many other forms, many with acknowledged musical greats, like Duke Ellington.

The Skasonics were at the National Gallery to support the main event of the day, the auctioning of posters entered in the 2018 International Reggae Poster Contest (IRPC). The proceeds from the auction were earmarked for the Alpha Institute. One of the dozens of posters auctioned was sold – with many gasps of astonishment from the audience – for $80,000. Total proceeds were $412, 750.

Among the speakers at the function was Dr Carolyn Cooper, the founder of the Reggae Studies Unit at The University of the West Indies, Mona, who said that her support of the IRPC was “one of the most satisfying things” she had ever done.

Another was Joshua Chamberlain, a founding member of the Jamaica Sound System Federation, who introduced the music technology curriculum at Alpha and launched the school’s radio station, a 24/7 streaming station. He praised the power of art in assisting personal development.