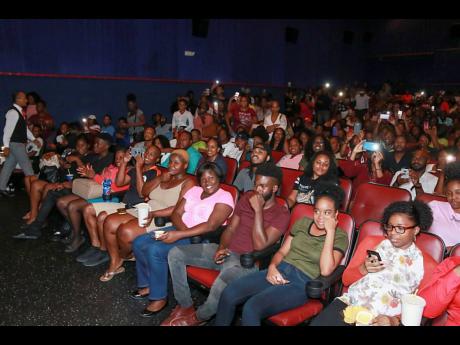 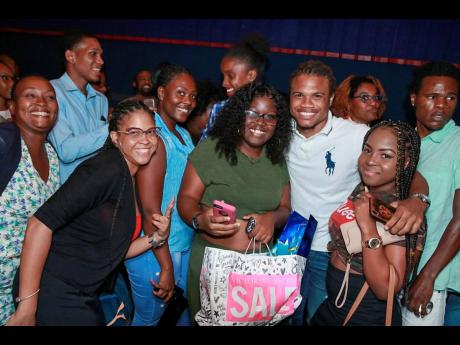 Excited fans surround 'Sprinter' lead actors when they surprised them at the Carib 5 on Tuesday. 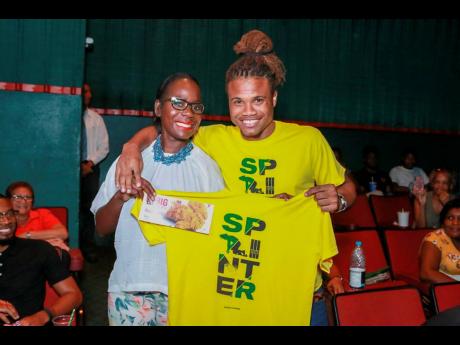 Lead actor, Kadeem Wilson, shares lens time with a fan who was surprised to see him at the recent showing of 'Sprinter' at Carib 5.
1
2
3

“That was epic, crazy! Fight all bruk out! People ah fight fi picture! People ah play tug-o-war wid mi shirt! The people at Carib must be upset because we block up the whole of the place,” lead actor Kadeem Wilson excitedly told The Gleaner. The film Sprinter recently opened in local cinemas, and, by all accounts, the response has been fever pitch. Last Tuesday night, two of the film’s leads, Wilson and Dale Elliot, paid a visit to the Carib 5 Theatre, where they surprised the audience with a special appearance that caused quite a commotion, with fans jostling with each other to take photographs with the big-screen stars.

“I’m happy that I’m feeling the fanfare. Being there and witnessing that, it was overwhelming and exciting. It was really cool. I was a little confused at first. They were already cheering when we just got in; it was real good. But when we finished talking and had to exit, it was a chore. It’s like, everyone wanted to remember that moment,” Wilson continued. He shared that two women actually started an argument that turned physical. “Them start chuck one another! But experiencing that, I recognise that people feel happy for you and proud of you – and they want you to know that they feel this way. I don’t welcome the tugging on my clothes and dragging me, but I get it; I understand why they would. It’s surreal, so cool.”

Storm Saulter, writer and director of the film, was there for the frenzy. “It was wild. I saw people pull Kadeem into a crowd. I thought it was his family! But when I asked him, he didn’t know who they were! When they saw Dale there after the lights came on, people freaked out. It exploded. It became a very frantic thing,” he said.

Film producer Rob Maylor was also there to see the theatre erupt after the credits started rolling, and the lights flicked on to reveal the breakout star Elliot standing dead-centre of the screen. “People were enamoured with them and their performance. That’s what you wish for as a creative. From an idea, just words on paper, to what happened that night. You can’t script those moments,” Maylor said.

Sprinter had a summer 2019 premiere, released during a period when the competition features films like Marvel’s Avengers: Endgame and Spiderman: Far From Home. “But once people see Sprinter, it’s like a major discovery. I can see it in their face. There’s a visceral reaction from people. They say they have never seen Jamaica depicted this way. From a film-making standpoint, the way we treated the elements (actors, setting, costumes, etc.), it’s familiar. It doesn’t feel like a foreign thing trying to be Jamaican, and I think Jamaicans are still processing that.” Saulter added.

Maylor’s experience with Sprinter has been personally rewarding, but with business at that the forefront, he is hoping for more. “I just wanna see way more people in the theatres. Hundreds of people go to see it every day. I’d love it to be thousands.” Nevertheless, he’s pleased that his parents can go to Carib and see a movie he’s worked on.

What has been most impressive for Maylor is the digital response to the film. “It’s stronger and more entertaining than any reactions we’ve received around the world.” He believes social media responses have been overwhelming because Sprinter was made for the Jamaican audience. Maylor said: “We made this film to speak to people here, to this audience first and foremost. The reaction has been more gratifying that anything I could have imagined.”

As pleased as Maylor, Saulter, Wilson and the rest of the cast and crew may be, the work continues. At the end of July, the film will make its way to Canada, where the cast will participate in Caribana 2019. Then they are headed to Notting Hill Carnival prior to the film’s release in the UK, in early September. In the midst of this, they hope there will be enough interest and support to keep Sprinter in Jamaican theatres for 10 to 12 weeks.

For those who don’t usually visit the theatre, they can certainly look forward to streaming Sprinter “one day down the line”. But Saulter assures that it will not be the same as watching with Jamaicans in the theatre. “It’s an important cultural moment, an enriching experience. I hope it gets across,” he said.