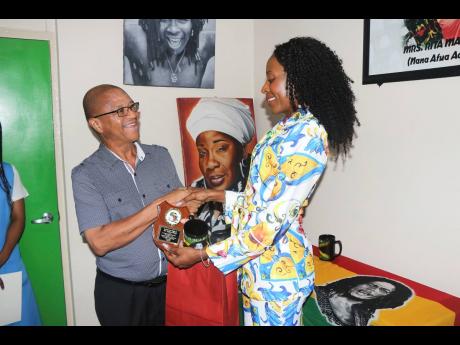 Contributed
Head judge Vernon Derby of Nationwide News Network receives an award from Rosemary Duncan, manager of the Rita Marley Foundation, for his contributions to the event. 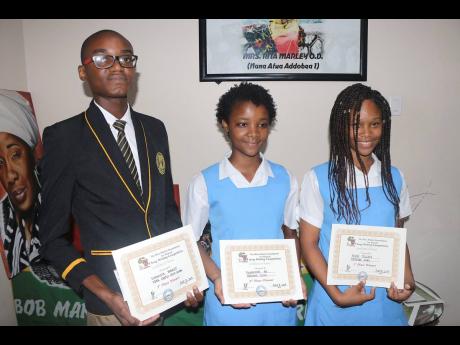 The Rita Marley Foundation, Jamaica, recently announced the winners of its inaugural songwriting competition, which targetted students attending high schools across Jamaica. The theme, ‘Strong Black Women and Their Role in History’ which was selected by Dr Rita Marley, was timely and relevant to the Jamaican cultural and musical landscape.

The foundation was highly impressed with the volume of entries and the keen interest of students, parents, and educators, reported Rosemary Duncan, manager of the foundation.

“Songwriting is an important skill and talent. Adding to that, it is a lucrative career that is in growing demand globally. Therefore, the Rita Marley Foundation is honoured to have conceptualised this activity,” Duncan stated.

An expert judging panel comprising chief executive officer of the National Library of Jamaica, Beverley Lashley; media personality Vernon Derby; dean of the School of Arts Management and Humanities at the Edna Manley College of the Visual and Performing Arts (EMCVPA), Dr Keino Senior; and head of the Department for Performance at EMCVPA, Michael Harris, selected the winners. They were awarded cash prizes of $50,000, $25,000 and $15,000.

Head judge Vernon Derby said that the competition has the potential of uplifting the nation’s youth.

“I speak for all the judges when I say that we were extremely amazed at the level of talent in the schools. The Rita Marley Foundation must continue to nurture their talents to ensure the future of music is well preserved,” Derby said.

Music and vocals will be added to Pollack’s winning submission, and acclaimed producer and musician Grub Cooper, who has worked with the Marley family on several tracks over the years, has been hired by the foundation to work on this project.

An elated Cooper stated, “As a veteran musician, it is a privilege to be able to participate with youth in this competition.”

It is expected that under his tutelage, a musical masterpiece will be created. He added, “Young people tend to believe they are the repository for all knowledge, so it is nice when young people can get out that box and be able to reach out to elders for knowledge. There are still some young people who are willing to learn.”

As the production gets under way, the foundation is already making plans for its 2020 execution of the songwriting competition.