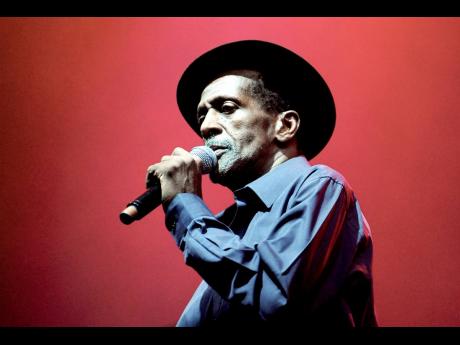 PA Wire
The late Gregory Isaacs on the main stage during day three of the 2010 Big Chill festival at Eastnor Castle Deer Park near Ledbury in Herefordshire.

Gregory Anthony Isaacs, OD, reggae’s undeniably ‘Cool Ruler’, would have celebrated his 69th birthday today, and according to his widow, June, he had a birthday ritual that he would follow, and a huge part of that involved a birthday cake – or rather, cakes.

“He would go to the studio for the early part of the day to accommodate his friends, then he would return home for his cake and gifts from the kids,” June Isaacs recalled. “Cake is a must. Sometimes more than one because he had a sweet tooth. He loved fruitcake, and he loved pastry.”

And then in the evening, Gregory would head out to Port Royal, one of his favourite spots, to chill and have dinner.

His daughter, Jenise, told The Gleaner that her father loved birthdays but was not one to throw a big birthday bash. “He would just be at home eating cake, he loved sweets. And then later in the evening, he and June would dress up and go somewhere.”

Jenise Isaacs noted that her homebody dad was a lot of fun and, one of her favourite memories was him taking her to the field for exercise. “Where we lived off Red Hills Road, there was a big field across the road, and he would line up all 10 of us, including cousins, and he would be like a military drill master as he took us through various exercise routines,” she recalled of the man to whom she was “always a child”.

Today, there possibly won’t be any fruitcake or pastry, but something special has been planned for the man, who recorded close to 500 albums.

“We have done up a new headstone,” June explained. “He was awarded the OD (Order of Distinction), and so this new headstone will reflect that.” It will be installed at Dovecot today.

The Night Nurse singer, enjoyed a career in the music industry that spanned over four decades and saw him amass a fan base all across the globe in an era when Instagram, Twitter and Facebook were still in the future. One of reggae music’s most popular singers, Isaacs is described as the most accomplished reggae artiste of all time.

Born in Fletcher’s Land, Gregory and his younger brother, Sylvester, were raised by their mother in Denham Town. Showing a natural aptitude for ­singing, he began making an impact on talent contests during his teens. He was inspired by stars such as Sam Cooke and Otis Redding, as well as local acts like Alton Ellis and the Melodians, but named his mother as his first vocal role model since he used to hear her sing while she ironed.