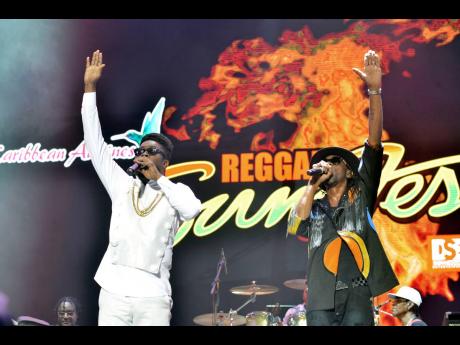 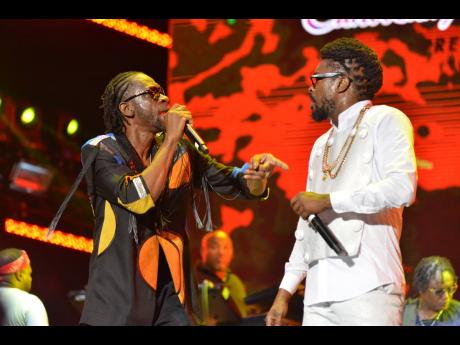 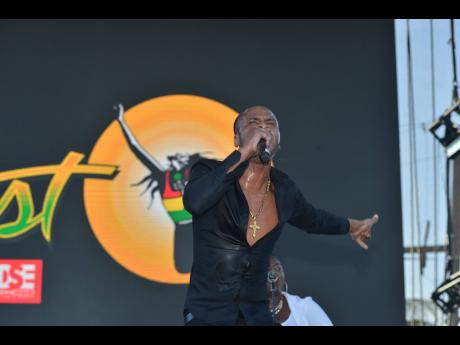 Kenyon Hemans
Dexta Daps has a special connection with the ladies. 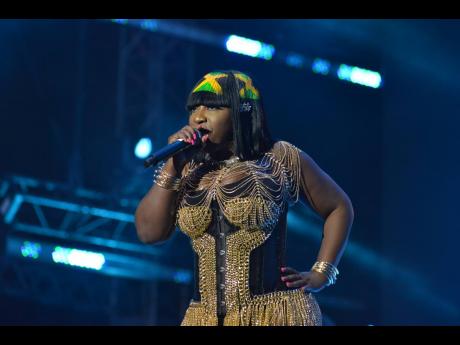 Kenyon Hemans
Internationally acclaimed artist, Spice proved once again why she is the undisputed Queen of dancehall.
1
2
3
4

THE USE of profanity by entertainers, poor time management by staffers, and what appeared to be a tension-filled backstage spoiled an otherwise spectacular opening night of Reggae Sumfest 2019.

On a night that reggae singers Chronixx and Koffee performed among hardcore dancehall artistes, patrons at Reggae Sumfest were treated to some scintillating performances by some of Jamaica’s biggest superstars.

The tens of thousands of persons who caused a traffic jam in Montego Bay, St James, as they journeyed to and from the venue, got what many are calling one of the greatest night’s offerings from a Sumfest stage.

Those who came to watch the friendly duel between Bounty Killer and Beenie Man got their money’s worth. They got more than they bargained for with Spice, and could not get enough of the likes of Munga Honourable, Agent Sasco, Aidonia, Govana, and Dexta Daps.

However, having stood for hours in anticipation of seeing the members of the 6ix perform, patrons were left disappointed as the police pulled the plug at 8:27 a.m., some two and a half hours after the scheduled end time.

Members of the 6ix, Chronic Law and Squash, two of the hottest dancehall acts in the business, were left stranded when the lawmen pulled the plug at the end of Jahvillani’s performance.

“The police were using their discretion in terms of allowing some time to go on, and the artistes were on stage using profanity. The police cannot preside over something like that,” Superintendent of Police Gary McKenzie said.

“Time management is very important. The show should have concluded at 5:30, it was extended to 7:30.”

But while the abrupt manner in which the show ended may have overshadowed the night’s events, the strength of Jamaica’s dancehall offering was not lost on onlookers. Dancer Orville Hall, who spoke with The Sunday Gleaner backstage, said Festival Night One of Reggae Sumfest is a great commentary for dancehall.

“I just hope the powers that be looking on and seeing what dancehall is doing for the tourist industry especially. People mark dem calendar and fly into Jamaica for both nights of Sumfest. Dancehall Night has grown. I think this is a record-breaking night in terms of crowd support and people are enjoying themselves,” Hall said.

He said that dancehall appears to be shedding its bad boy image.

“I think people didn’t understand that dancehall is an adult space, it has been from ever since. It has evolved and sectors of it now cater to different audiences. But we can’t forget that dancehall is raw and raunchy and there is a space in music for it. We have to accept it for what it is and embrace it. Don’t shut it down. Don’t label it as bad and crude. Look at the festival. It is millions of dollars invested and people turn out to see the show. The writing is on the wall,” he added.

Spice, the dancehall queen, said dancehall artistes demonstrated that the genre is on the rise.

“Dancehall is not dead and there is room for it still. A lot of people kinda throw in the towel pan dancehall and label it as ‘boogu yaga’ music and it nah go no weh, and ‘horse dead and cow fat’, but it is strong. This is our only festival we have in Jamaica, our biggest festival, and the support goes to show that dancehall is one of the leading genres right now, whether you want to believe it or not,” she said.

Bounty Killer said the genre continues to grow but its exponents must seek to be more responsible.

“Dancehall international right now so it can’t even get a fight again, as just we as Jamaicans affi just protect it and act more professional. But we know why dancehall get a fight. Not everybody in dancehall have the right attitude and the right behaviour so some things in dancehall has to be cleaned up for dancehall to get the real support,” he said.