#GLNRSumfest | 'I only have me'... How Dalton delivered at the greatest Reggae festival 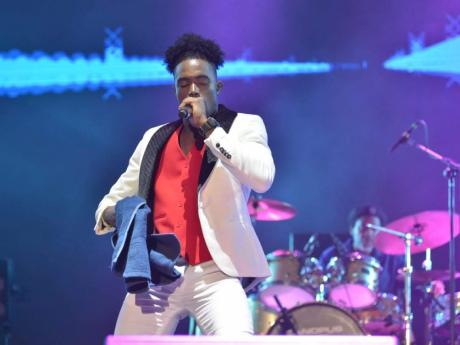 In the months leading up to his big Reggae Sumfest debut, there was apprehension whether X Factor UK winner, Dalton Harris though talented was ready for the Catherine Hall stage.

But the artiste dismissed doubters and delivered delightfully during his inaugural performance.

Harris did not have an extensive catalogue but thrilled his way into the hearts of thousands of patrons.

Perhaps earning the first ovation of the festival, the singer impressed with his undeniable vocal range and impressive stage presence.

He delivered a diverse set which included songs from his X Factor run, original tracks released after his Digicel Rising Stars win as well as new material.

Indicating that it took him some 11 years to earn his first solo slot at Sumfest, the entertainer told the crowd that he has only just begun to make massive moves in his career.

#ReggaeSumfest2019: "Yuh want me build you a mansion when me barely have a car," sings @harrisdalton as what is being dubbed his '2 million set' comes to a close. Are you feeling his story? #GLNRSumfest #GLNREnt pic.twitter.com/TAlq2bcN2F

"Me remember the first time me perform a Sumfest pan di Digicel small stage and people turn dem back when me go pan stage because a nuh the real show. And me see Tanya Stephens come pan the show and she sing and she sing and me say me a gi mi self ten years, it take me bout 11 but look pan me now," he said.

In a post performance interview with The Gleaner, Harris said despite the negativity spewed at him in recent times, he kept a clear head and his eyes on the prize because he knows where he's headed.

"I think I came here and I did what me know me supposed to do, I was just myself. If me nuh stay positive or me mess up mi lose mi self. Me understand say somebody words can't gimme me power," he said.

#ReggaeSumfest2019: The X factor UK winner @harrisdalton soothes the crowd with his award winning vocals telling his 'story'. He mentions his 2 mil paycheque adding that the limit is truly the sky! #GLNRSumfest #GLNREnt pic.twitter.com/EZXe2lfi04

I just keep it pushing and never expect more dan me can give. A me alone me have so me just take care of mi self and focus pan weh me want."