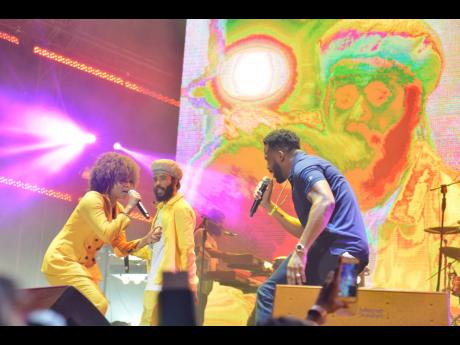 Awake from their slumber last Saturday night, the audience that stood in anticipation of the performance from former musical protégé Protoje acknowledged that he has since mastered the craft.

With the fullest versatility on display, the Grammy-nominated lyricist, a Lion King in his own right, questioned Who is a Scar to a Simba, the collab with Jessie Royal on Royal’s Lion Order.

Whether it was with Like This or Rasta Man , featuring Ky-Mani Marley, Protoje built the energy of the audience, which had only previously been stirred by X-Factor/Digicel Rising stars Dalton Harris.

Introducing newcomer Lila Ike to his set led to a resounding ovation, which doubled when Agent Sasco made a surprise entrance. Singer/DJ Chronixx joined Protoje on stage, with the internationally acclaimed Who Knows receiving the loudest ovation of the night to that point.

Buju Banton had not yet hit the stage, neither had two of the Digicel Rising Stars trio. Romain Virgo and Christopher Martin, who made history by being on the same internationally acclaimed stage performing for the same audience in one night.

Opening with a rendition of Sam Smith’s Stay With Me, Virgo stepped on stage donned in a fashionable three-pieced suit. As he inquired if the crowd believed in love, In This Together and Wanna Go Home showed that he ­definitely did, whereas Love Doctor and Don’t You Remember showed his vocal prowess. The audience itself was just as Rich in Love as Virgo was, feeling the power of his robust set. The loudest ovation was for 10-year-old Tashae Silvera, who chastised the “dutty men” and the “waste men” alike, with the background showing the statistics of missing children.

You can never go wrong with ending your set with the country’s national anthem, and Virgo did so flawlessly.

The consummate professional, beckoned by his given name, Hugh Beresford Hammond, showed that few things are as consistent as the excellence of a Beres Hammond performance. Come Back Home did not disappoint Step Aside Now and Standing in the Way both pleaded for a lesser man to move up. In making the crowd Feel Good, Hammond expressed the same sentiment.

Even though every song is a classic, Double Trouble and Putting Up Resistance spoke to timeless hits the cultured Catherine Hall crowd could appreciate. “I wonder if you remember this song yah.” Seriously, Hammond? Catherine Hall, Reggae Sumfest, Montego Bay remember every word to every song you have ever done.

The penultimate act at Reggae Sumfest 2019 was indeed a Big Deal, not a meal deal. Year in and year out, Christopher Martin has used the Sumfest stage to show his growth as an artiste and a performer, and Saturday night was his best to date.

Totally in his element, Can’t Love Me Now and Cheaters Anthem struck a resounding ovation as Martin refused to extol misogyny in an era of women empowerment.

Leave People Business Alone was followed by Martin imploring the audience to love the country’s women, with the rash of violence prevalent in today’s Jamaica.

The Strong One, Etana, came out in a black and gold dress to a Better Tomorrow. With a vocal presence that was impossible to ignore, Etana entertained with Warrior Love and I Rise, which got the audience to sing along. Years later, Wrong Address still has the same effect, which speaks to how relatable her words are in song.

The 27th Reggae Sumfest also saw performances from a conscious and captivating Jah9, whose message had the audience in action mode.