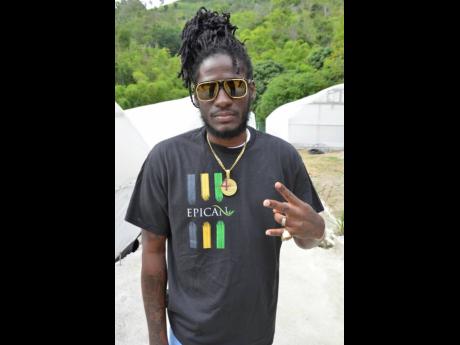 The cannabis industry has grown and has been inextricably woven into the fabric of reggae and dancehall culture. As more dispensaries emerge, so too have consumers and ambassadors, like 4th Genna frontman Aidonia. Earlier this year, the Hot Tool deejay took a pioneering step to become the first dancehall artiste to sign on as a brand ambassador for cannabis. Specifically, Aidonia is aligned with Epican, the island’s first cannabis brand.

In a fulsome show of ambassadorship, he will perform live during the dispensary’s first ­anniversary celebration tomorrow in Marketplace’s parking lot.

Believe it or not, one of the outstanding benefits, after signing on as brand ambassador, is not that he may or may not get some free ounces as gifts; rather, the recording artiste has found that aligning with Epican has increased his exposure globally. “A lot of people have really approached me and big me up for being a part of the movement, as the first dancehall artiste to endorse it on this scale. I was in Los Angeles the other day, and people who didn’t know me before – know of me now,” he told The Gleaner.

Aidonia’s explanation for advocating cannabis culture follows what many before him have offered: that consuming the psycho-active plant is a necessary, rewarding part of his creative ­process. “For me, cannabis is all a part of the experience,” he said.

More than using the plant to ‘kick back’ and relax, minds like Aidonia’s use it to encourage their creativity. “I use it to create the vibe to write and record. It’s part of the process.”

He said he’s always had a close relationship with cannabis, a fact he has shared in his music over the years. “Dancehall and marijuana are one, and I’m happy to be part of the movement.”

While there is a mad scramble for investors and small farmers to slice a piece of this emerging industry’s pie, and for lawmakers to regulate production guidelines, Aidonia is comfortable as an ambassador, supporting one brand as he ­continues to grow his own.

“Right now, it’s all about ­supporting Epican and helping to build up that brand. 4th Genna is trying to be impactful musically, so we are carving a space for ­ourselves in music.”

Since signing to Epican, Aidonia has made multiple appearances at the brand’s weekly event series, Hot Box. His support continues at tomorrow’s anniversary ­celebration, ­featuring music by Chromatic, DJ Nicco and Laing D.