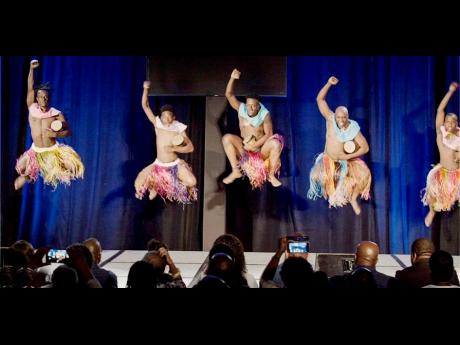 Performing arts company ASHE was in fine form in Florida last weekend. Ifidel Williams, integrated marketing and communications lead for the ensemble, said the members had their Miami audience in stitches, and later, dancing out of their seats in a sensational two-for-one show.

Williams noted that their appearance last Saturday night was significant for two reasons: it was a return to something of the past and the performers planted seeds that have sprouted root. Already, the troupe has been invited to return before year-end.

ASHE was in Miami to support their affiliate church, the Universal Centre of Truth for Better Living, which was hosting their annual convention, the Panorama of Truth. The institution’s president, the Rev Dr Sheila McKeithen (based in Jamaica), invited ASHE to perform in the opening ceremony. The troupe ended up with a free Saturday evening, and decided not to tarry. ”We said why not just do a show and invite the diaspora to come and see?” Williams shared.

They garnered the support of Commissioner Maxwell Chambers (Miramar) and consul general to Jamaica, Oliver Mair, as patrons of the evening. “Their support heightened the energy around the show and put us in a better position for the audiences to receive us in a very big way,” Williams stated.

ASHE offered two shows for the price of one. The first half featured an original musical, Ded Leff, written by artistic director Michael Holgate, arranged by executive director Conroy Wilson. Themed with ‘identity’, the plot follows a Jamaican who left the island as a youngster for a life in London, England, then must return after the passing of his mother.

“On his return home, he has to go through a series of stuff to find back his true identity. Him lose him roots when him go ah Englan’ so him foreign-mind, that kind of thing takes over. One of the things the spirit of his mother has commissioned him to do is to go a nine-night and try to find back his roots. Of course, going into the Jamaican nine-night was funny – the characters themselves who were telling the story kept the audience on their tippy-toes, laughing throughout the whole experience,” Williams described. The second half was a mixture of Jamaican pop, patriotic songs, reggae and dancehall songs that Williams said had the audience on their feet and dancing from start to finish.

At curtain close, the company could celebrate that the fourth generation will soon return to the Sunshine State. Williams reports that other opportunities have arisen. “I think the Miami thing has kicked a lot of things into gear. The commissioner in Miramar wants us to come back to do something in October. They also want us to come for Mother’s Day next year.

“Another group is also in discussions to bring us back closer to that time. There is also a discussion on the table for us to go to Mexico and Orlando, Florida. Our eyes are fixed on those opportunities that have come up for us, and we’re working them to see where they lead,” he said.

ASHE also has plans in place to head to Trinidad & Tobago to represent Jamaica in CARIFESTA XIV (August 16-25), the Caribbean’s roving, multidisciplinary, mega arts festival which attracts a wide range of creative artists from various Caribbean and Latin American countries.

Before that trip, ASHE’s next stop is on the main stage at the Grand Gala on Tuesday, August 6, at the National Stadium.