10 nods each for Taylor Swift, Ariana Grande at MTV awards 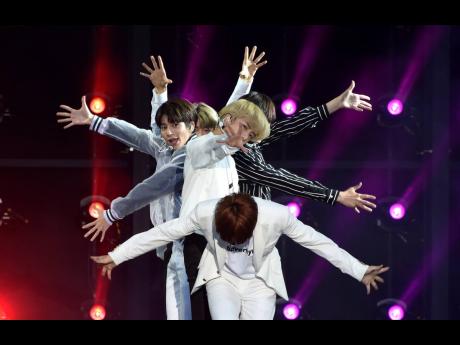 AP
K-Pop band Tomorrow X Together performs at Wango Tango in June at Dignity Health Sports Park in Carson, California. Their video for ‘Cat and Dog’ is nominated in the new K-Pop category.

The 29-year-old pop star’s hit, ME!, featuring Panic! At the Disco’s Brendon Urie is up for Best Collaboration, Best Cinematography and Best Visual Effects, while her song, You Need to Calm Down, scooped seven nominations for Best Pop, Video for Good, Video of the Year, Song of the Year, Best Direction, Best Editing and Best Art Direction.

Ariana’s catchy track Thank U, Next could walk away with a trophy for Song of the Year, Video of the Year, Best Pop and Best Cinematography, while her hits God is a Woman, Rule the World and Seven Rings wiggled their way into Best Visual Effects, Best Hip Hop, Best Editing and Best Art, respectively.

The 26-year-old singer could also scoop Artiste of the Year but she’ll have to beat off competition from Cardi B, Billie Eilish, Halsey, Jonas Brothers and Shawn Mendes first.

Video of the Year is proving a tough category as 21 Savage ft J Cole’s a lot, Billie’s Bad Guy, Jonas Brothers’ Sucker, Lil Nas X ft Billy Ray Cyrus’ Old Town Road and Taylor’s You Need to Calm Down will all go head-to-head in a bid to score the prize.

Although Taylor and Ariana are the front-runners in the list of nominations this year, Billie and Lil Nas X are right behind them with nine and eight nods each and could well walk away with a prize or two.

MTV has introduced a new category this year called K-Pop, which will see videos for BTS ft Halsey Boy With Luv, BLACKPINK hit Kill This Love; Who Do You Love by Monsta X ft. French Montana; Cat & Dog by Tomorrow X Together; NCT 127’s Regular and Tempo by EXO compete against one another.

Sebastian Maniscalco is set to host the 2019 MTV Video Music Awards, which will broadcast live from the Prudential Center in Newark, New Jersey, in August.

He said: “I am hosting the VMA’s 2019, it’s a big deal. It’s huge! But again my family’s negative but my dad calls and goes ‘You know nothing about music’.

“I didn’t really grow up with pop culture music but I think this is going to be fun because MTV want an unfiltered look of the VMA’s.”