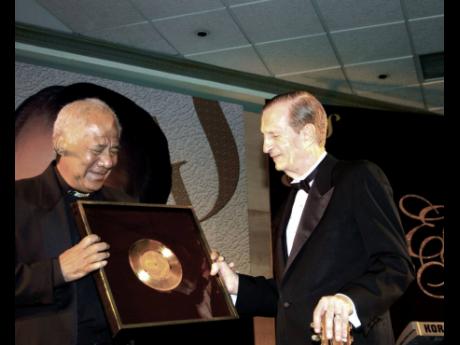 File
In this May 2005 file photo, Byron Lee (left) presents former Prime Minister Edward Seaga a copy of the group’s 1959 album ‘Dumplings’, which Seaga produced. Both men were instrumental in the success of Roy Shirley’s career. 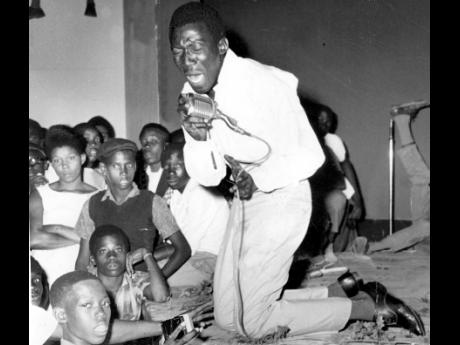 Gleaner Photo
Roy Shirley goes down on his knees as he wowed the audience at the Palace Theatre back in the 1960s. 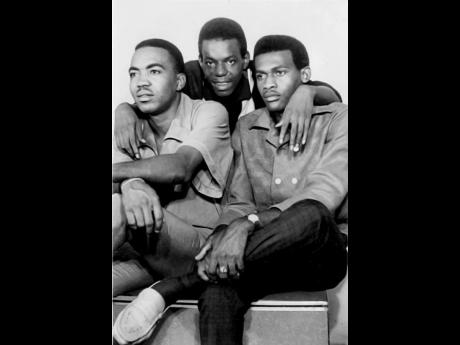 Contributed
A 1970 picture showing members of The Uniques. From left: Lloyd Charmers, Slim Smith, and Jimmy Riley. Roy Shirley is credited with starting the group.
1
2
3

The month of July is littered with the birthdates of outstanding Jamaican entertainers who have made invaluable contributions to the development of early Jamaican popular music. One such is Roy Shirley, who was born in Kingston on July 18, 1944. He was, perhaps, the most eccentric performer the island has ever produced. Unique, although quite applicable, is still a thin and battered term to describe Shirley’s antics on stage as he created ecstatic scenes at venues like The Carib Theatre during the 1960s.

Dressed in something resembling a pastor’s gown, with headgear to match, Shirley would kneel and pray, wail and groan on stage as he delivered his songs with a voice that was beyond description. His electrifying performances oftentimes led mesmerised audiences into a kind of music fever that literally moved them forward within touching distance of the performer, something he deeply relished, being one whose main aim was to please and interact with his audience: “Even in my performances, I always like to give people satisfaction for the money they’ve paid, so you’ll always get your money’s worth from me,” he told me in a 2006 interview. Shirley, thus duly earned his title ‘The Musical High Priest’.

It was nothing short of high drama, however, when one attended a Roy Shirley performance. Singing with deep emotion, he would sometimes be overcome by it and burst into tears while on stage. This frenetic energy, Shirley stored and took with him into the early 2000s, when he appeared on a couple of the Mikey Barnett/Keith Brown-promoted Heineken Startime show at the Mas Camp Entertainment Centre.

But onstage performances are only one half of a great performer’s true worth, and Shirley proved that he was as equally adept in a recording studio as he was on stage. In fact, it was his recordings that brought him to public attention and led to his appearances on stage. According to Shirley, “My inspiration started from about age nine-10 while I attended Boys’ Town School. I have always been hungry for music. My mother also helped to inspire me through the church and the members urged me on. When I’ve finished singing, the spirit that I gain from even listening to my voice told me that there is always a godliness there,” Shirley shared as he emotionally recounted his earliest years.

A stroke of luck

His debut, Shirley With the Diamond Ring, done for producer Leslie Kong’s Beverley’s label in 1964, is said to have influenced his stage name – Shirley. He was, in fact, born Roy Rushton at 84 North Street in Kingston but grew up in the Trench Town community, where he first became exposed to music. It was by a stroke of luck that an influential Caucasian woman, after hearing him singing to himself, was impressed, and got him on to the Lannaman’s talent show aired on a popular radio station. A second prize on Vere Johns’ talent shows in the early 1960s was next. This drew the attention of Culture Minister Edward Seaga and bandleader Byron Lee, who included him on shows around the island.

By early 1966, Roy fancied his chances of recording a big hit with his self-penned Hold Them. He was searching to create a special beat he called one drop, but it kept eluding him. Shirley recounted the episode to me “I wanted to fulfil my bass line because it was a slow music, but every time I tried to put a bass line over the song, it wouldn’t drop. Then one night, I heard a Salvation Army band strumming up a beat along Orange Street, and same time, the drop beat of the tune I wanted came into my head,” Shirley said. It was historic because Hold Them, according to Shirley, became the first one-drop recording, providing the cornerstone for the rock Steady beat. The recording was a massive No.1 hit in Jamaica in 1967. It is also credited with being the catapulting force that brought Joe Gibbs to prominence as a record producer on the Amalgamated record label.

Several massive hits followed for Shirley, including Get On The Ball, Who God Bless, Be Good, Dancing Reggae, and the immortal Music Field, which brought producer Bunny Lee into the business. Shirley is also credited with starting the popular reggae group, The Uniques, with Slim Smith and Franklyn White. They starred in the Bunny Lee-produced recording Facts of Life, while Shirley added his voice to Festival celebrations in 1968 with Golden Festival.

The most comedic act to emerge from Jamaica’s popular music, Shirley brought gimmickry into Jamaican music. At the other end of the spectrum, Shirley, after settling in the United Kingdom (UK) in the 1970s, demonstrated his altruistic character when he helped to establish the UK All Stars Artistic Federation and The British Universal Talent Development Association in the mid-1970s, aimed at promoting and supporting promising, young entertainers. He spent his later years helping to set up similar projects.

A one-of-a-kind performer, Shirley was found dead at his home in Thamesmead, UK, in July 2008, incidentally, the same month that he was born.