The Butler’s Empire kicks off 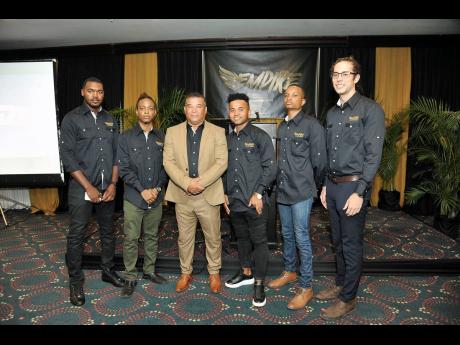 With footballer Kyle Butler as chief executive officer and Leon Bailey as chief financial officer, Craig Butler plans to stand in the background as the advisor behind some serious plans for the latest entertainment brand, Empire Entertainment.

Noting the standard short lifespan of professional footballers, Jamaica’s most involved ­locker-room dad and his sons have come up with a succession plan – a European-influenced empire, to be led and managed by his boys. This brand’s blueprint comes with the eventual development of a hotel, first-class football facilities and a lounge, scheduled to open in January 2020. But before the hotel and football field plans are realised in a projected three and a half years, the Butler family will lay the Empire’s foundation with European-themed events and parties.

“I recognise the gap that was in our country, a gap for experiencing what we see when we’re in Europe. Many people don’t know, feel or taste what happens there, and so we decided to forge the Empire,” Butler said during a launch event held at The Jamaica Pegasus hotel recently. “What happens in Spain? What is the favourite food in Austria, Germany, Italy? Many of us don’t get the opportunity to taste and feel that experience, unless we go once in a while on holiday. We want to bring it here on a continuous basis,” he continued.

Empire Entertainment is founded on major ideas that include establishing two world-class football facilities that mimic the elevated approach Europeans take in the sport. “We realise that the career of football is very short-lived. You work for about 10, 15 years if you’re lucky, and then you retire. Many don’t prepare for the future. As a result, we wanted to use the skill sets and personalities of the people who are involved to advance not just themselves, but our country.”

The team is aiming for Empire Entertainment to grow into a powerful entity that will eventually be able to deliver a hotel, which can be offered to overseas teams for training camps and tournaments. Butler said: “The Norway Cup is one of the biggest youth football tournaments in the world, over 50,000 kids. Norway is also one of the coldest places on Earth, and yet they have so many people going to their tournament. Can you imagine if we had that tournament in Jamaica, with our culture, our beaches, our people?”

Though absent from the launch event as he is currently working in Europe, Leon Bailey delivered his executive function via a video message. “This has been a goal for our family for many years – since childhood – to utilise our experience in the football world and converge it into something Jamaicans and Europeans alike can enjoy and benefit from. I’ve seen and learned so much more about life on the European side. I believe it should be shared and built upon,” he said. Bailey has already started contributing to the brand with his party series, Drip Season.

Butler believes the key to this Empire’s success will depend on their ability to deliver first-world service, in a categorically defined Third-World country. “We’re not taking advantage of what our resources are. We’re not putting enough in to make it viable. So we’re gonna do our part with two fields – one in the heart of Kingston and another out in the countryside,” he determined.

For the rest of this year, Empire Entertainment will turn their attentions to the philanthropic side of things. “Dad has always opened his home to those who are looking to better themselves. So as Empire, as his sons, we want to continue that with the charity events we’re going to be doing,” Grant said.

Next month, there will be a painting exercise at Bailey’s old church and basic school. The second activity is a trip down Red Hills Road to host a back-to-school drive. “We will also be doing a toy drive in December, for the Christmas. We want to think about the children at all times, make sure they can be happy,” the managing director added.