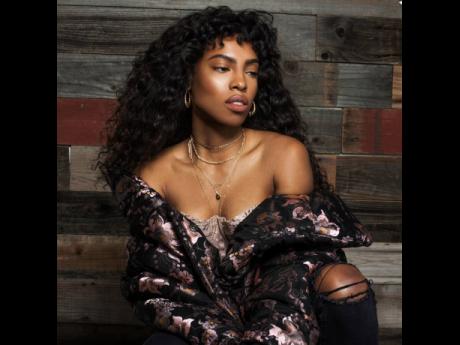 Chauntae Pink is shaking things up with her style and lyrical flow. The New York (NY)-born entertainer, a graduate of the University of California, Los Angeles School of Theatre, Film and Television, fuses Afropunk, poetic pop and a modern twist of R&B. The singer-songwriter rides the waves of an alternative beat with a splash of reggae to create a unique style she dubs future soul.

“I am into blending the heterogeneous sounds of the musical genres with a little of this and that,” Pink said in a recent interview with The Gleaner.

Pink, whose parents are Jamaicans, is classically trained in musical theatre, and has a blooming acting career, with appearances which include School of Rock on Nickelodeon; Two Broke Girls on CBS; Franklin and Bash on TNT; Viola Davis-produced American KoKo on ABC Digital; a feature in the box office hit Straight Outta Compton , and the supporting role in Lake Bell’s, I Do ... Until I Don’t, starring Ed Helms and Amber Heard.

Her interest in music is deep-rooted, however, but she only started blossoming three years ago.

Chauntae Pink (and no, it’s not a name made up for the stage) shares, “I am fairly new, it’s fresh and I only started out doing it for myself. Then I met people who were like, ‘consider getting into studio.’ So it was with that, that frequenting studios to listen to rhythms began.”

Her catalogue, though small, is a potent mix of musical fragrances. Pink is known for her singles released in 2017 and 2018: Black Boys, Pull Up and You The One.

In terms of the opportunities, she says, “I have always known I have to do that for myself by putting my best foot forward. I am just making ways to get into the different entertainment areas, because I think a lot of time, as a black woman, it is important to show force. If the door is not opening, then climb in through the window. You just have to make your own magic.”

The entertainer’s latest wave of the wand brought her to Jamaica to use the landscape as the main backdrop for the upcoming single, Mad Dem, a dancehall-infused music video project, shot by Jonkonnu Productions, led by award-winning director and Carlington Silburn.

“It is definitely dancehall, but more on the modern side, and my reasons for coming to Jamaica to shoot this view in particular is because it needed that grass-roots element,” she said. “The video is an eclectic, artsy display of masculine-female energy, not much dancing, which persons usually expect of a dancehall track. The focus is heavily on female empowerment and owning your power.”

Pink says she is targeting millennials, listeners in their early 20s and mid-30s, “and it has been so far, so good”.

Despite the challenge of wearing multiple hats as an independent artiste/actor, the singer is determined to make her balancing act work. She is currently making an effort to put together a strong team to promote her brand, and does not shy away from ­celebrating what has stemmed from an active film career. However, she anticipates the Mad Dem track and music video will produce top pickings.

“I think I can balance both, because, as I explained earlier, if you want it all, you can take it all. A lot of responsibility comes with that, obviously, but I recognise I am still in the germination stages and I don’t have a team to nurture it as yet, but I love an organic experience.”

Although Chauntae Pink wants to be part of the music community in Jamaica, she is still interested in repping for NY. She explained, “I want to plant roots here, while still celebrating where I was born in NY, by shooting more music videos in my community, and to represent the first generation of recording artistes, like me, and just make music that makes music.”