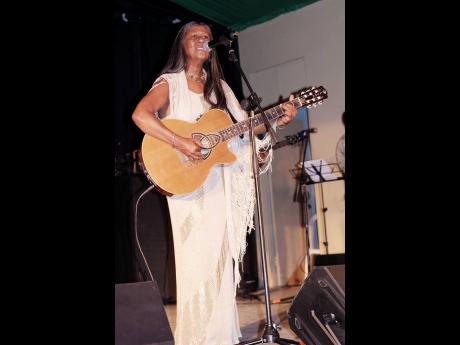 Stephanie Lyew
Representing in true songbird fashion, Charmaine Limonius sings as she strums a tune for the guests at the Tribute to the Greats awards ceremony on Saturday, July 27. 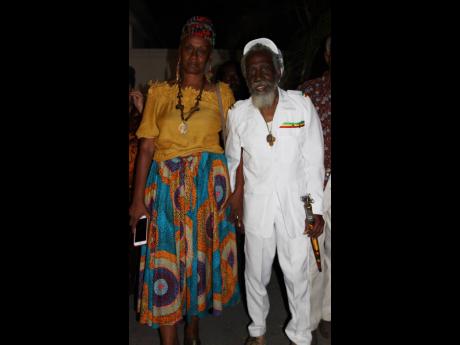 Stephanie Lyew
Maxine Stowe providing support to Bunny Wailer, as usual, as they exit Curphey Place after the Tribute to the Greats event. 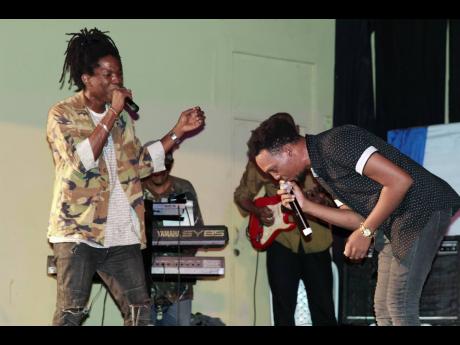 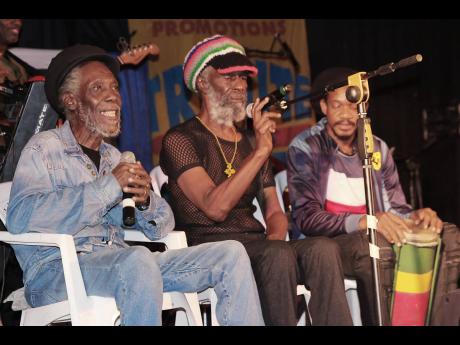 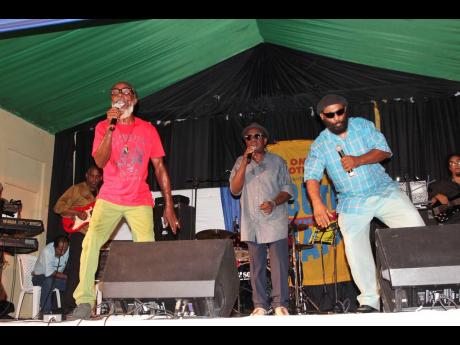 Stephanie Lyew
The Mighty Diamonds dance in the spotlight at Tribute to the Greats held at Curphey Place, last Saturday.
1
2
3
4
5

Hervin ‘Blvk Hero’ Bailey and Jason ‘Written’ Wright, two members of tribute group The Wailers Trio – which also comprises Abijah Asadenaki Livingston, son of Bunny Wailer – were not prepared for the encore performance that was demanded by guests at the Tribute to the Greats awards ceremony last Saturday.

Supported by the Rhythm Masters band, the singjays started off their musical homage with the sounds of Concrete Jungle then segued into the 1965 and 1963 hits respectively, One Love and Simmer Down, which actually got the veteran Bunny Wailer to give a standing ovation. However, the shouts of “encore” from the guests proved that the medley was not enough and they were forced to re-enter the stage at Curphey Place.

For the encore, Blvk Hero and Written succeeded at creating a freestyle flavour that tastefully sampled the lyrics of Wait in Vain, leaving the guests more than satisfied with their performance.

“I was definitely not prepared for an encore, but we have to give the people what they want,” Blvk Hero said as he exited the stage.

Both recording artistes included bits and pieces of their own material – Superstition from Blvk Hero and Fear to Understand from Written – and while the music was accepted, it never distracted from the objective, which was to pay tribute to the veterans. Regrettably, owing to prior overseas engagements, Asadenaki was not part of the performance, but it was shared that he would be present for upcoming events.

Like the original Wailers trio, the independent artistes have joined forces to collaborate in the industry even as they continue to fine-tune their individual music careers to create solid catalogues.

“We don’t know what the future may hold in terms of recording together, but for now, we are focused on the vision of being ambassadors for the legacy created by the veterans. It definitely does not take away from our solo careers as we still perform our own music in the set.”

Another performer for the evening, Charmaine Limonius, scored with To Sir With Love and a well-received medley of songs by the proclaimed ‘Queen of Reggae’, Marcia Griffiths. Among the songs were When You’re In Love, Land of Love, and Dreamland.

Throughout the set, the “young at heart” songbird kept motivating the guests to get up and dance, which some individuals eventually did, but it was the other trio recognised at Tribute to the Greats, The Mighty Diamonds, that brought persons to their feet. Celebratory whistles were triggered as the group performed a few of their best known singles, Pass the Kutchie, Have Mercy, and I Need a Roof, ending the eventful evening of performances.

Kingsley ‘King Omar’ Goodison, organiser of the awards ceremony, was left smiling from ear to ear as the night came to a close.

“It was a beautiful turnout. A thing of real quality. And for an event of 22 years, every year gets better in terms of the production, the atmosphere, and the ‘feel-good’ music,” Goodison told The Gleaner.

He continued, “It has become more like a movement and a meeting grounds now; some people come from overseas just to be part of the celebration. To be honest, I don’t know how it comes together because we don’t have a banner with any of the big companies, but we have managed to do it with hard work.”

The organiser said he was appreciative of the turnout, as well as the various contributions made to make the event happen, and urged the music industry, both young and old acts, to participate in paying tribute to the greats.