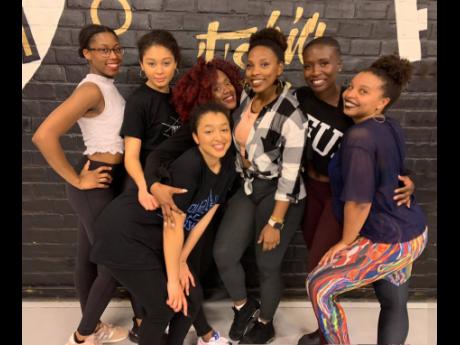 Contributed
Belgian dance group, Be Your Authentic Self.

Organised by the Jamaica Cultural Development Commission (JCDC), the annual World Reggae Dance Championship is known for inviting talents from around the globe. For more than 10 years, dancehall and reggae dance groups, from yard and abroad, have competed on stage for a chance to claim the championship title as well as cash prizes.

The 2019 instalment of the competition takes place tomorrow at the National Arena, and will feature foreign talents in the form of Be Your Authentic Self, a dance group out of Belgium in Western Europe.

The group is an all-female coalition consisting of seven dancers. Team members include Fanta Tounkara, Maithe Zinga, Chris Lange, Sara Ndiaye, Alexane Makosso, Ilona Makosso, and Jaylissa Lambourdiere. Be Your Authentic Self specialises in dance forms that can be described as experimental and artful, representing the creativity of the African diaspora. Their entering the World Reggae Dance Championship shows the group’s confidence in their ability to accurately and effectively manifest the many dance styles present within the African diaspora, particularly those of the Caribbean.

Juliett Cowan-Morgan, World Reggae Dance Championship coordinator at the JCDC, says she is always eager to see what international teams will bring to the table in terms of their interpretations of Jamaican dance styles.

“Every year, we have interesting entries from local teams as well as those from overseas . I appreciate having the opportunity to see foreigners face off against local teams, because it shows us how others love and receive our culture. It also makes for good entertainment.”

Cowan-Morgan made note of the distinctive dance pieces presented by the Belgian girls. She is curious to see how they will adjust to the current tempo of their rivals tomorrow.

Tickets are available at the JCDC head office, Independence Village, as well as Fontana Pharmacy outlets in Barbican, Mandeville and Montego Bay.