Kadooment Day, a grand climax to Crop Over 2019 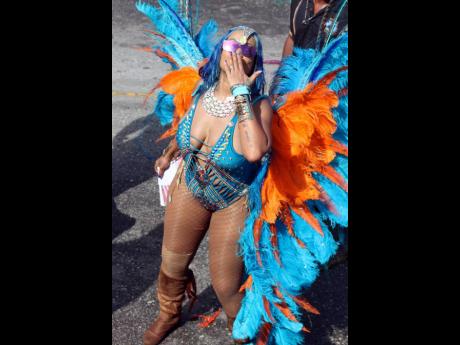 Stephanie Lyew
RIGHT: Queen of Soca Alison Hinds blows royal kisses to our cameras as she passed in her extravagant costume from Zulu International band. 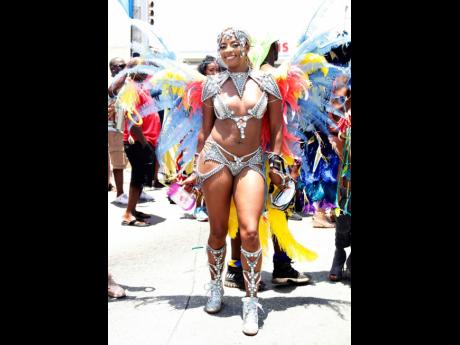 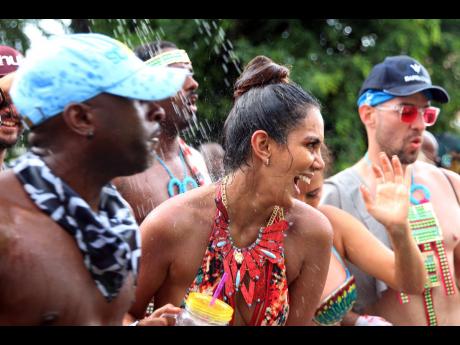 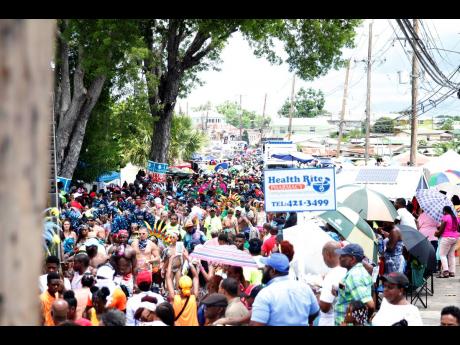 Stephanie Lyew
The narrow roads of Barbados did not affect the ‘wuk up’ activities of the Grand Kadooment Day in Barbados on Monday, August 5. Seen here are local and international revellers alike, as well as bystanders interacting in the streets of Black Rock. 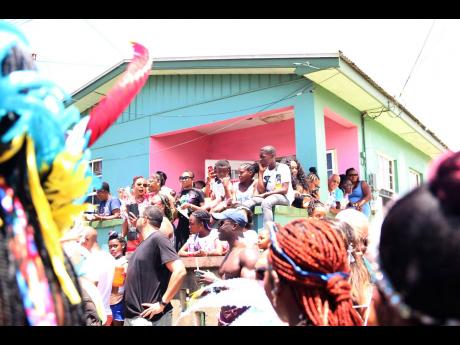 Stephanie Lyew
People camp out outside a home to watch the colourful Kadooment Day march.
1
2
3
4
5

The recurring message of Crop Over was “play more local soca”.

Barbados’ music industry professionals, from recording artistes and producers to disc jockeys, were encouraged to promote what belongs to them, and, for the most part, this was achieved on Grand Kadooment Day celebrated on Monday, August 5.

“Most definitely, Crop Over in Barbados is a unique, authentic experience and the events must reflect what it means to be Barbadian,” said Senator Rudy Grant, chief executive office of the Barbados Hotel and Tourism Association, who watched the celebration from the sidelines.

He added, “We recognise very clearly, year after year, that Crop Over is different in fusing that Barbadian element, both in relation to the activities and music.”

The genre is widely dominated by artistes from the carnival Mecca, Trinidad and Tobago. However, while revellers wined up and down to hits like Famalay by Machel Montana and Skinny Fabulous; Savannah Grass by Kes; Like It Hot by Patrice Roberts; Run Wid It by Mr Killa, and Right for Somebody by Kerwin Du Bois, the sounds of Bajan artistes, including Lil Rick, Leadpipe, Mole, Alison Hinds, SK, King Bubba and Faith, dominated the speakers of the trucks which rolled down one designated route through Stadium Road, Station Hill, Eagle Hall, Black Rock to Spring Garden. Small, street-side fetes also supported the sound of the island’s local music.

Crop Over 2019, dubbed ‘The Sweetest Summer Festival’, boasted one of the largest and most colourful carnivals in the Caribbean region, even outnumbering the twin island republic, with over 20 bands with various sections marching on the road, while Trinidad & Tobago usually has approximately 12, all-inclusive bands. Remarkably, despite its large size chipping down the narrow roads, the march was fairly organised, starting and ending on time.

The reaction of the majority of Barbadian locals was that Grand Kadooment was impressive, and, according to Matthew Babb, who chose to join the march out of costume, the festival takes pride in organisation, although he praised Jamaica for having a dynamic entertainment package on the day.

“I love the idea of mixing up the music for a carnival, which probably isn’t the most authentic but enjoyable for a diversity of people who attend,” Babb told The Gleaner.

When Bajans say nonstop feting they mean it, having brief breaks (less than five minutes) along the route and no lunch until the journey is complete. Like the temperature on Monday, which hit a high of 96 degrees Fahrenheit, the musical energy was also fiery, provided mainly by the disc jockeys. However, Krave the Band outdid some of the more popular band names like Baje International (the largest with 12 costumed sections) Zulu International and Khosa by having guest entertainer Machel Montano on one of their trucks. And, others like the posh and voguish Aura, which was primarily filled with millennials, had their celebrity ambassador, Rihanna, playing mas with them for most of the day which closed at 5 pm, for the bands to go to their spots.