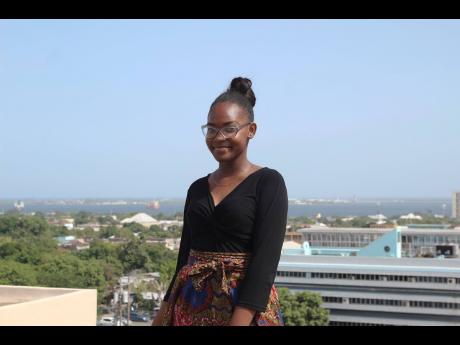 Lyrically powerful and possessing the maturity of any entertainer seasoned in the music industry, Kevinna Melbourne makes it known that she is here to make a change. The recent winner of the Jamaica Cultural Development Commission (JCDC) Children’s Gospel Song competition in the solo 11-15 category wields an unapologetic attitude to the series of events that led her to where she is.

It would not be the first time that Melbourne, who is transitioning to fifth form in the upcoming school year, has won medals, having been a frequent solo entrant in the various competitions offered by the JCDC and as a member of her school choir at Morant Bay High since 2016.

The lionhearted lyrics of her original pieces, I Am A Warrior, Abusive, and Bye Bye to Badmind are punctuated with silky-toned confessionals and display affirmed self-reliance after the traumatic ordeals in the various homes she has lived.

“In writing each of those tracks, I was thinking about the abuse, simple things I couldn’t smile about, from being treated as the “dead-lefts”, beatings with machete and other items around the house, and just saying life has been abusive without my mother,” Melbourne said.

The original pieces rewarded her with several gold medals, but it was her rendition of Marvin Sapp’s Never Would Have Made It that earned her the winning title, along with cash prizes from JCDC and fast-food franchise Popeyes Chicken, which she says will be invested in her tertiary education.

“When I think of all the things that could have gone wrong, all I want to tell people is how great God is, and the song says, ‘ I am stronger, I am wiser and so much better when I look back on the things you brought me through, I knew I never would’ve made it without you.’ It speaks to my story,” she shared about the international gospel singer’s lyrics.

Melbourne had a heartbreaking childhood. the stories she speaks of are known to produce tear-jerking music. She lost her mother at the age of seven and suffered a great deal while living with relatives.

“I’m over it,” Melbourne quickly said as the subject changed from her potential career in music to dealing with the loss of her mother.

“The memory remains. I remember she told me she was going to return home on the Wednesday – this was a Friday – and my sisters and I were waiting on her to come back, but she didn’t. The story is that she lost a lot of blood after giving birth to my brother,” she continued.

The first time she sang for an audience was at her mother’s funeral in 2010, she revealed in her interview with The Sunday Gleaner.

“From then, I recognised I could hold a note,” she said, while at the same time saying that no one could have predicted what would come next. After six years living with relatives, Melbourne and her siblings were separated. two went to live with their fathers, while she and her sister sought to find their own. However, when she did, things did not take a positive turn, and she ended up in the care of the Child Protection and Family Services Agency. She is now happy to share that she has a caring and supportive foster mother.

“I am glad I am the only one in the system and they are with their dads. We live in the same parish, but for three years, we did not see each other. I was like, ‘God help me!’ because even with high averages after taking the GSAT examinations, they were not originally placed in the best schools, but I believe that was the work of the devil. With His guidance, I was able to convince my school principal to give them a place at Morant Bay High. So right now, we are at the same school, but my brother just turned nine and attends primary school,” she said.

“Out of all my siblings, I want to help my brother. his situation presents some difficulty, and I am working towards a goal so that I can be that support,” she revealed.

The business-minded teenager has her eyes set on attending the Northern Caribbean University in Mandeville to further studies in business administration and journalism and says if her career in music is to happen, it will.

She has already shared the stage with Etana, where she performed the reggae singer’s single Free at a school event but has since quit the school choir.

“I believe when you are part of a team, no matter who wins, there should be a show of support. Similarly, I don’t want to get consumed in the goings-on of the music industry. I am all about gospel music and giving a voice to share positive messages. My greatest aspiration is to meet the likes of Jermaine Edwards and Kevin Downswell. I don’t want to go into the reggae sphere professionally,” she said.