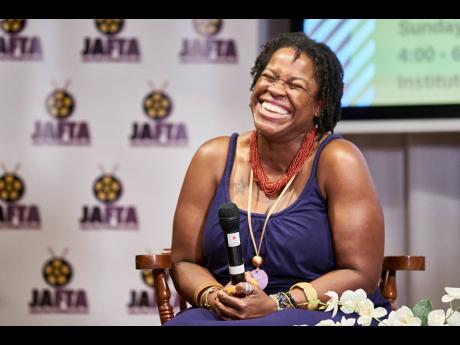 Professionals in the film and affiliated creative industries recently sat down with actor Michael Hyatt for an intimate evening conversation on the evolution of her international acting career and how her artistic and professional growth coincided with her emotional growth.

Since Hyatt’s Broadway debut in Ragtime, she has played major roles in popular films like Nightcrawler and an array of acclaimed television series, including HBO’s The Wire, True Detective, Ray Donovan, and, most recently, Crazy Ex-Girlfriend and John Singleton’s Snowfall.

Yes, her stage name is Michael; a high school nickname she accepted willingly on account of her love for Michael Jackson, the consummate performer and entertainer. The Jamaican Michael is one of the daughters of acclaimed actor and playwright, Charles Hyatt and renowned art historian and museologist Vera Hyatt. The magnetism, brilliance, and defiance she radiates (on and off screen) all run in the blood, you could say. Still, her talent had to be unlocked.

Manifesto Jamaica, the Jamaica Film and Television Association (JAFTA) and Good News Jamaica convened the forum on July 28 at the Institute of Jamaica to explore the theme, ‘Actualising an International Acting Career’. Easing into the conversation effortlessly, the guest of honour regaled the audience with memories of watching her parents work and writing her own plays, as a child, which she performed with her younger brother. Her unconstrained appetite for acting ultimately led her to take on, and bear, the unmatched toil that is the toil of an artist.

When actor and moderator Noelle Kerr enquired how and when the ‘good gigs’ started coming, Hyatt spoke candidly about self-sabotage. After weathering countless blows to her self-esteem, over many years, she eventually conjured up the courage to redefine her sense of self and stand for her right to simply be.

“Once I started doing the (emotional) work, that’s when the casting agents started calling. We, as artists, are given a gift … we’re vessels of truth. Understand that your struggles are worth it. Push through them so that you can become the artist you were meant to be,” Hyatt urged.

Shifting from an initially reflective perspective to a more forward-looking view, she challenged members of the audience: “Get out of your own way and say yes to manifesting your true purpose. You never know what the universe has in store for you if you just say yes!.”

A common thread among questions posed by audience members was how to handle rejection and pursue an acting career despite age or lack of experience. Hyatt’s primary nuggets of advice were: “ decide for yourself where you belong and keep trying. Listen to the voice within you, and step into your power. Align yourself with a community… join JAFTA.”

Highlighting the context of the event and future collaborative efforts between their organisations and other relevant partners, Analisa Chapman, president of JAFTA, and Lesley-Ann Welsh, managing director of Manifesto Jamaica, spoke to the objective of developing Jamaica’s creative industries by spurring on proactive conversations that reinforce global standards while empowering more Jamaicans to tell their stories.

As Hyatt puts it, “If you ask for it, you better bring your best work.”