Kudos for Third World’s ‘More Work To Be Done’ 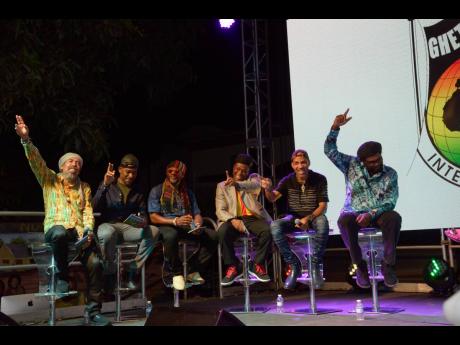 Shorn Hector
Veteran reggae group Third World at the listening party for their album, ‘More Work To Be Done’, at the Bob Marley Museum in Kingston last Thursday.

After an impressive, award-laden four and a half decades in the music business, the original ‘Reggae Ambassadors’, Third World, have presented an album that is as fresh as their 96 Degrees in the Shade was scorching hot. Last Thursday, a crowd that could be called familial, comprising colleagues, industry players and media, gathered at the Bob Marley Museum on Hope Road under the stars to hear what the legendary reggae group had to offer. And they were not disappointed.

A 10-time Grammy nominee, Third World is yet to add this coveted trophy to its ever-growing list of honours, but music critics predict that this Damian Marley-produced album, More Work To Be Done, could very well be “the one”. Lenworth ‘Squeeze’ Samuels, who was in charge of the juggling, spoke for a lot of persons when he declared that More Work To Be Done was “a quality body of work”.

‘Wonderful’ , ‘Great music’, ‘Fantastic’, were some of the comments from the specially invited guests about the group’s 22nd studio album.

“This is really a great album. It is what we expect from Third World in terms of presentation and quality, but the sound is current. It is still very roots but with a ‘now’ feel. I like it,” Bridget Anderson, Samory I’s manager, told The Gleaner.

“If after 45 years in the business, Third World has dropped an album entitled More Work To Be Done, then it is highly possible that 10 years from now, we will all be back here celebrating the release of another new album,” host Colin Hines declared.

More Work To Be Done features collabs with artistes such as Chronixx, Tarrus Riley, Busy Signal, Pressure Busspipe, Tessanne Chin and Damian ‘Jr Gong’ Marley. Last Friday was the official release date for the 12-song set. (Song number 12 is actually a bonus that is on the LP only.)

In-between the playing of the songs and the showing of the accompanying music videos, where possible, Third World spoke of the journey towards this album, which is the first since the 2014 death of former lead singer, Bunny Rugs. The group was full of praise for current lead singer A.J. Brown, who ‘was good enough to step in when Rugs passed’ and they also had kudos for Marley, who Cat Coore called family.

A.J. Brown confessed that he was a little uncertain about one of the collaborations on the album, but, confident of Jr. Gong’s ability, he simply followed his lead, “and it worked out great”.

Producer Jr Gong, was supposed to have been present, but flight issues meant that there was an apology and a video message instead.

The youngest son of Bob Marley stated that he was honoured to work with the legendary group, many of whose members he refers to as ‘uncle’, being friends with their children and having visited their homes as a child.

Taking to Instagram Thursday night, Jr Gong wrote, “I’m honoured and blessed to be the producer of Third World’s brand new album More Work To Be Done that will release to the world tomorrow Friday, Aug 16!!!