The No-Maddz to release album on August 30 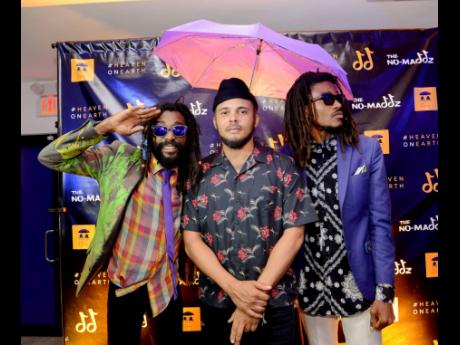 When art collective dub poetry duo The No-Maddz debuted music from their Heaven on Earth (HOE) album at an intimate listening party in April, there was a feeling that this 11-track project would be an antidote for the mentally broken, a game changer for any future reggae discourse, and a treasure chest filled with jewels for societal development. Four months later, fans and music celebrants will be able to experience and curate their own HOE when the project drops on August 30.

The group is anticipating the response from the world, particularly Jamaicans.

“Whereas it might be much easier for overseas to hear the project, internally, as The No-Maddz ,we would really feel good if everybody in the diaspora, especially in Jamaica, embraces it and hears it,” one half of the duo, Everaldo Creary, told The Gleaner. “We couldn’t hold on to the album anymore and decided we have to get it out to the streets and get it to the students. It’s medicine through the ears, it’s critical thinking and mental health, and it’s really about personal development. When we talk about personal development, it’s being able to make good decisions and know the difference between a bad idea and a good one. It doesn’t matter the context, everything is based on decisions.”

The album, co-produced with Major Lazer’s Walshy Fire, signifies the debut project since The No-Maddz became a duo and was recorded at Geejam Studios in Portland and mixed by The Wixard. The tracklist includes the scripture-based opener The Chant, Mountain Lion, In Town, Beat Them Down (featuring rapper Shadow and Idris Elba), and Wretched, featuring Grammy-nominated Kumar (formerly of Raging Fyah). Classics from the No-Maddz catalogue are also among the set, namely Clarkz Like Dis and Wha Dis (Puku Poo). The latter is also featured on the group’s first studio album, produced by ‘Sly’ Dunbar and ‘Robbie’ Shakespeare in 2014.

Following the album’s release, the group will embark on a world tour, which will see them returning to Europe and increasing their presence in the Caribbean and Jamaica.

“When the project comes out, we will see how the people react and move forward accordingly. We’re confident about it, so we know by spring and summer of next year, or even before, we’ll definitely be ‘shubbing’ out some more performances.”

Before then, you can catch The No-Maddz at the silent headphones acoustic experience dubbed Inner Ear on August 24 on the lawns of Sky Dweller in Kingston.

Creary also shared that plans were afoot for the return of the group’s live concert series, Trod, which commenced in 2010 and unfolded across Jamaica for several years.

“We have to plan it properly, but we are definitely working towards bringing back that awesome No-Maddz live show that everybody loves, where we can just perform all the HOE songs for the beautiful people of Jamaica, who always a support we,” he said. “We also want to do a nice school tour and amplify how visible and audible we are to the youths ’cause every day we meet dem in the streets and dem give we lectures and pour out dem heart, and let us know how important we are as a pillar of strength contributing to the upholding of the culture. We appreciate the love overall, and we just a go do the road as hard as possible.”

The No-Maddz was formed two decades ago as a quartet when the dub poetry scene was being suppressed by rising deejays. The creatives have since appeared in films such as Better Mus’ Come (2010) and Yardie (2018).