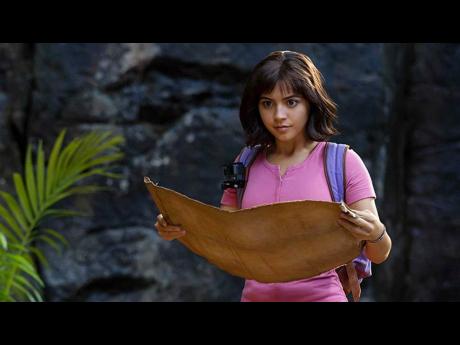 AP
Dora (Isabela Moner) sets out on her most dangerous adventure yet in ‘Dora and the Lost City of Gold’.

To be perfectly honest, the life of a film critic is not as glamorous as it seems. Some weeks, you’re writing about the amazing experience of watching a movie that comes along once in a lifetime. Others, you have to be a grown adult walking into the live action adaptation of Dora the Explorer.

The movie begins as you might expect. Dora is traversing the jungle, swinging from vines, followed closely by cousin Diego and her talking monkey, Boots. The Dora the Explorer theme song plays and for anyone young enough to be watching the cartoon, it’s the perfect way to start the film. Then the movie yanks you out of that fantasy to show you Dora and Diego have actually been imagining their adventure the entire time. Fast-forward by four years and Dora’s parents decide the jungle isn’t the best place for a child to make friends, and send her off to the big city.

Imagine the upbeat persona from the cartoon, often singing songs and relentlessly positive. The film juxtaposes that character against a modern-day high school with snarky teenagers and finds a way to make it clever. In fact, the film is constantly surprising with how inventive it is with its concept, which is especially impressive, considering the film goes through so many changes.

The movie soon takes you back to the jungle, where it shows you that it’s not afraid to be as weird as it can be. Suddenly the lines between Dora’s fantasy and the real world are blurred. A talking (computer-generated imagery) cgi fox wears a mask and all anyone seems to care about is why he feels the need to remain anonymous. It’s a film that wears its sensibilities on its sleeve and makes no apologies for what it’s trying to be – a good-natured family film with some real thought behind its humour.

I can’t believe I’m saying this; in fact, it seems wrong as I say it, but Dora and the Lost City of Gold is one of the best films of 2019. It’s an uncompromising adventure that’s much funnier than it deserves to be, and it’s impeccably acted by lead actress Isabela Moner, who perfectly captures the film’s idiosyncratic tone, which perfectly aids the film in delivering its message about the importance of individuality as well as cooperating with people unlike yourself.