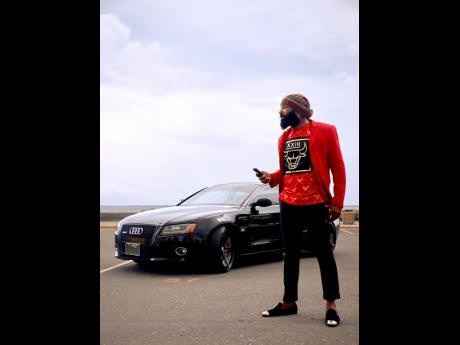 Clearly cognisant of the longevity and immense value of foundation reggae rhythms, singer, Anthony Cruz has ticked off one item on his bucket list – to record on the original Walk Away From Love rhythm.

It was in 2004 that British-Jamaican reggae singer Bitty McLean’s Walk Away From Love on the On Bond Street KGN, JA album, soared up the British and Jamaican charts. The song, however, was recorded on an original Treasure Isle rhythm, owned by the co-producer of the album, Christopher “Chris Peckings” Price.

“I have wanted to record on this rhythm for years, but I just couldn’t find the owner,” Cruz told The Gleaner. “But I was determined and finally, I tracked down Mr Peckings and we secured clearance and from there it was a go,” explained the Half Way Tree singer, who is working on an album for Tads International Records. What made this journey to the rhythm even more special for Cruz was the fact that Price told his that he was a fan of his music.

“That was a good feeling to hear that people are really listening to your music and it’s making an impact, because we are in an age where gimmicks are the order of the day. So I am happy to know that all these gimmicks [are] not affecting the real music,” he said.

The reggae singer expressed concern for the lack of music in the music.

“Gimmicks is not music,” he asserted. “You have a million people following you for the gimmicks, but where is the support from these same people when you put out a new album or a single. Not even 10 per cent of these people make a purchase,” he said.

Lamenting on the gap left by the death of singers such ass Dennis Brown, Gregory Isaacs and John Holt, Cruz noted that it was up to the singers and players of instruments in his era to carry on the message. He made reference to the fact that Toots and The Maytals’ 1968 hit 5446 Was My Number was one of the 44 songs revealed to be on former US President Barack Obama’s summer playlist for 2019.

“Real music has longevity,” he stated, adding his fulsome praise for teenage sensation Koffee, whose Toast also made the cut. “Gratitude is a mus’,” he said, reeling off the lyrics from Toast.

The Rastafarian singer, who is the nephew of late reggae singer, Garnett Silk, has already released two tracks from his as-yet-unnamed album – Oh Lord and Jah Cruz Medley, on the Walk Away From Love rhythm, which he describes as a “real lovers rock tune”.

He has released the music video for Oh Lord, which, was inspired by the man who Rastafarians refer to as Kings of Kings and Lord of Lords, His Imperial Majesty (HIM) Haile Selassie.

”I was overwhelmed when I did my research and found out that HIM was actually given this title at his crowning in Addis Ababa in 1930. That is a part of history. And so this song, Oh Lord, is dedicated to Rastafari,” stated.

Oh Lord is currently sitting at the top of the Foundation Radio Network Top 30 Reggae Chart in the US. Cruz says he gives thanks for all the support and love this song has received, and singled out DJ Roy of Irie Jam Radio.

“After he got the song, DJ Roy called me and said, ‘Cruz, mek sure yuh do the video for this song,’” he shared.

The album, which will have a final track list of 17, is scheduled to be released early 2020, but right now, Cruz is “ready for the road.”