Jamaican food, music a winning collab at Taste of Tennis 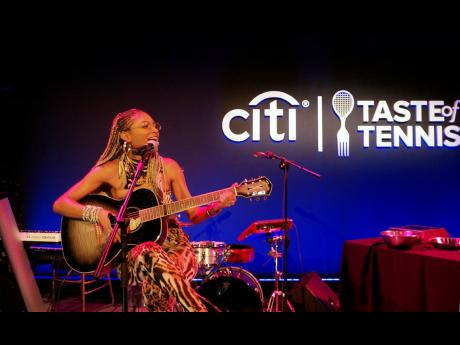 Late last week, Jamaica shone brightly at the Taste of Tennis event, held annually in New York City. Taste of Tennis takes place each year just before the start of the prestigious US Open tournament, and it is a massive gourmet food and entertainment bash that brings together A-list tennis stars and dozens of the leading chefs from across New York City, who serve up mouth-watering samples of their signature food and beverage creations for four hours. And where there is tennis and food, music also abounds.

This year, the party changed venues from the W Hotel on Lexington Avenue to the Cipriani on 42nd Street in midtown Manhattan, but despite the larger venue, the location was jam-packed, bursting at the seams with hundreds of tennis and food lovers anxious to dive into all that the party promised – and for good a reason, too, as the attendees had to fork out US$300 to attend this premium party. The celebrity line-up included Venus and Serena Williams, top ATP American player John Isner, former heavyweight boxing champion Mike Tyson, and many others. The Williams sisters participated in a cook-off that ended in a draw. Both were presented with a basket of ingredients and asked to prepare a dish within 15 minutes.

Koffee’s Toast blasted from the speaker boxes as the well-dressed audience rocked to the reggae beat. And Naomi Cowan, who flew in from Kingston, took command of the main stage and delivered a strong live performance that generated applause from the upscale attendees. Other performances for the evening came from the Rakiem Walker Project, a band that toured with chef Marcus Samuelsson on his cookbook tour, and the Potash Twins, a contemporary jazz ensemble.

But although top-tier New York City idols were in the house – celebrity chefs Richard Blais and Masaharu Morimoto – the real culinary magnet for the evening was a Jamaican dancing chef, Wenford P. Simpson, who jumped and pranced to reggae and pop classics while he dished out generous portions of pulled jerk chicken tacos and roasted corn bruschetta with a guava balsamic vinaigrette that kept patrons flocking to the Jamaica Tourist Board’s (JTB) exciting booth all night. And for the proverbial icing on the cake, the JTB partnered with Walkerswood Caribbean Foods, Appleton Estate Rum, and Red Stripe to brand the Jamaican presence in a powerful way.

“Taste of Tennis and Jamaica have had a productive relationship for the past five years,” JTB’s deputy director of the Americas, Donnie Dawson, told The Gleaner. “This has been an excellent platform to showcase Jamaica to an affluent group of New Yorkers, and with New York being the number-one market region for us within the United States, we are very happy to have once again participated.”