TommyandCarlene inseparable and ‘Going Down To Paradise’ 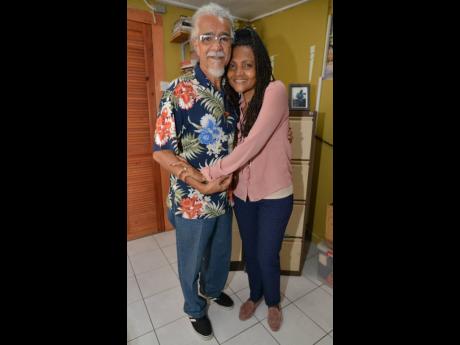 Simply put, TommyandCarlene are couple goals. And, they don’t even need a hashtag to write their names all joined together.

Inseparable is perhaps the best word to describe them. In fact, the Dennis Brown song of the same name could be soundtrack of their lives, or, then again, perhaps it’s Going Down To Paradise, the song which Carlene dedicated to Tommy on their recent wedding anniversary.

After decades of togetherness on a musical journey that saw them move from the secular to fully embracing gospel and dedicating their lives to the upliftment and conversion of souls, one half of the couple looks like time stood still, while the other, not quite so much so. But, that half is over the moon about a crispy clean bill of health, following a recent annual check-up. TommyandCarlene attracted quite a bit of admiration at Reggae Sumfest last year when they were seen walking through the venue hand in hand, looking like sixteen-and-in-love, as they supported their daughter Naomi, who threw her parents a curve ball when she announced that she was following their footsteps into the world of entertainment.

However, Naomi herself is the first one to point out just how much of a fantastic collaboration they are. On their wedding anniversary on August 6, she paid tribute to them on social media. “Happy anniversary you two. Forever on the same stage, same page, same wave...” And Carlene, who has somehow managed to keep those stars dazzling in her eyes when she speaks of or looks at Tommy, sent him a shout-out on Instagram that was just “couple gold.” With the song Going Down To Paradise as the soundtrack, she catalogued their journey in pictures, from the wedding day through to the present, with each picture more loved-up than the one before. At the end, she gives thanks: “To God be the glory great things he has done in our marriage, and we look forward to what he has in store for us as we fulfil his assignment. Love you more than paradise plum.” (Awwwww!)

When quizzed by The Sunday Gleaner about the tribute, Tommy attempted to be nonchalant. “She still doing those things?” he asked. “That’s what happens when you marry a young girl,” he said beaming, only to add, sotto voce, “she really not that much younger than me yuh nuh.”

But, he was quick to make up for that lapse, if you can call it that, a few minutes later when trying to figure out how long they’ve been together. “How many years now Babes?” he asked, and she did a quick calculation on her phone. In response to her declaration that it was 38 years, Tommy, without missing a beat, and even managing to sound surprised, stated, “What! But you don’t look 38.” She really doesn’t.

TommyandCarlene say there is no secret to their almost four decades of togetherness. “It’s the goodness of God,” Carlene said. “My relationship with the Lord taught me to live through the hills and valleys. Just trust the Lord,” she advised, emphasising the importance of family, and mentioned her adored stepchildren, from Tommy’s first marriage.

The genesis of their love story is perhaps one of the very few things on which they actually disagree. As Carlene remembers it, she met Tommy through music, while visiting Jamaica from her home in Canada. He was the established music producer and had a talent agency and she was an up-and-coming artiste. “I did my first Sunsplash in 1980, in Kingston, at Ranny Williams Centre. A big promoter saw my performance and invited me to a show in New York. Tommy was also in New York with Bob (Marley) at the time and we met up there, and that’s when I really started getting to know him,” Carlene recalled.

But, for Tommy, it all started when he saw Carlene singing backup for Ernie Smith one night at the Sheraton hotel and he was mesmerised by her voice – and her voice only. “I’m sitting in the audience and she is singing back vocals. I said ‘wow, the girl singing back vocals, what an amazing voice!’ And then I went backstage to find out who she was. Well, according to Ernie Smith (reggae singer) I asked ‘Who own her’ and his reply was ‘She own herself’,” Tommy recalls with a laugh, still insisting that he wasn’t “looking her.”

Having established themselves on the secular stage, with Carlene thrilling fans worldwide and Tommy as singer, artiste manager, producer and emcee extraordinaire – Mr ‘Yes Indeed’ – the two ditched the glamour, fame and prosperity of that world to heed a call from God. If persons were stunned when Carlene Davis went gospel, then they were wide-eyed and open-mouthed when Rastafarian Tommy announced that he was going to follow the same path – locks and all. His locks disturbed the Christian community, but, as Carlene pointed out, “He didn’t hear God say cut your locks and come. He says come as you are. And the truth is that his locks have been part of his ministry. He says this is where I am coming from, but this is not where I am now.”

“Giving is what keeps us living,” Tommy said, and through their gospel mission and concert series, Fun In The Son, they have seen over 20,000 persons coming to the Lord. With a stated mission to win the next generation for Jesus Christ, and to provide opportunities for anointed ministers to convey the unadulterated message of the gospel through their God-given talents, it is their vision to create first a country and ultimately a region that will come together in diverse, yet true worship of Jesus Christ. “Whatever God is doing, we just let God be God,” Carlene said.

Another edition of the free concert and outreach programme, Fun In The Son, comes up on September 28 at Folly Estate in Portland. The flyer highlights Carlene Davis, Kevin Downswell, Alaine, Rondell Positive, Sara Cowan-Conner, Ity, Marq Johnson and Tommy Cowan.